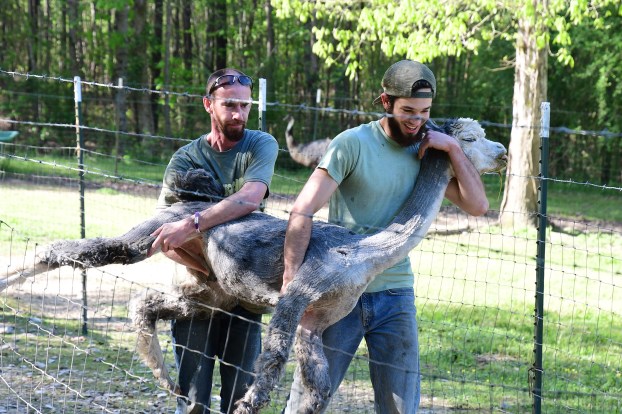 One of the alpacas at Serenity Animal Farm in Clanton is carried after its annual shearing. The animal would not do well in the Southern summer heat with the coat still on. (J.R. TIDWELL/ADVERTISER)

While COVID-19 may be changing the landscape of date-to-day life for many people across the country, certain industries carry on.

Take the animals at Serenity Animal Farm in Clanton for example. Coronavirus or no, the llamas, alpacas and sheep must have their woolen coats removed before the warm Southern summer gets here, lest the animals suffer in the heat.

Owner Mark Bagley on April 3 welcomed back a crew of workers originating from Ohio that crisscross the country shearing woolen-coated animals for their owners.

“This is the only way they can survive this Alabama heat,” he said.

According to Bagley, the crew that handled the shearing at his farm were in South Carolina the previous day, had his stop in Clanton and would be heading to Mississippi and finally Texas before the end of the day.

“We pretty much travel around the country for three months, normally April through the end of June, shearing alpacas, llamas and sheep, anything the owners want us to shear,” said Caleb Fisher, who heads up this particular crew.

Fisher said the average farm has about 10 animals to shear, though his crew has done as many as 58 in one stop. 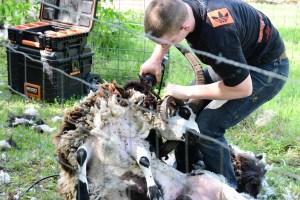 A Jacob sheep has its wool coat sheared. (J.R. TIDWELL/ADVERTISER)

Fisher said his mother owns 36 alpacas, and his brother joined a traveling shearing crew when he was younger, that is how he ended up taking on the job.

“I decided I wanted to do it too,” he said. “I’ve been doing this six years now. You get a lot stronger (from working with the animals). It’s definitely a young man’s game. I enjoy doing it.”

Bagley had 15 animals for the crew to shear. Once the coat is removed, the wool can be used for things like making blankets.

Bagley has been keeping alpacas and other woolen creatures for around 10 years now. He said the only major change this year due to COVID-19 was the crew not requiring any help from the farmers to pick up the wool as they worked.

“They wanted that for social distancing,” he said.

Bagley said owning and caring for exotic animals on the farm is “an adventure every day.”

“Last week, we had a goat with a broken leg,” he said. “A few weeks ago, we had an emu out on the loose. It’s fun, it’s adventurous and it makes for a fantastic life.”