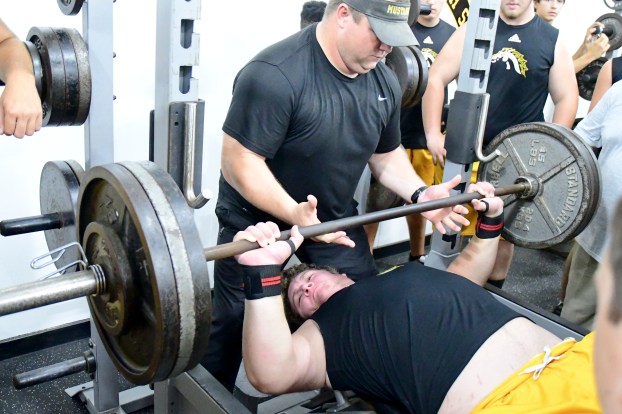 High school athletes do not have the luxury of using their school’s weight room at the moment due to the coronavirus. (File photo)

No spring practice means being creative

Although there will be no more spring high school sports this year due to the coronavirus pandemic, it is still important for athletes to finds ways to remain in shape while at home.

This is especially important for football players, who would be focusing on spring practice if not for the current pandemic.

“I worry about kids just sitting around and not doing anything,” Chilton County head coach Tal Morrison said. “There’s no way to monitor what they’re doing, how hard they’re pushing, or if they’re even pushing themselves as all.”

Despite not being able to have a hands-on approach with their players, several coaches have continued to stay touch with their teams from afar and have even sent out workout plans and ideas that players can follow from the comfort of their home.

“We just have to adapt and overcome,” Jemison head coach Blake Bradley said. “As coaches, we always talk about adversity and how to beat it, well here it is staring us right in the face.”

However, building strength can be a little more challenging than working on endurance, especially if players previously relied on using the weight room at the school.

Being creative when it comes to weight training is one of the things Morrison and Bradley have encouraged their players to do at this time.

“Use anything that you can find around the house that’s weight-bearing,” Bradley said.

Possible creative means include using a backpack weighed down with rocks or books or latching jugs of water to a post for something similar to a bench press.

According to Morrison, he remembers putting his younger sister on his back and doing pushups growing up. Anything he could to help build his strength.

“We’ve got a lot of guys that are ‘country strong,’ and they get that way by working on the farm,” Morrison said. “That can come in handy at a time like this.”

Morrison and Bradley are currently in the midst of devising a plan for the summer with their position coaches.

According to Bradley, having a plan in place is key, that way once they are able to begin practicing again, they can dive right into the program with any wasted time.

“We’ve got a lot of guys that are young, and we’re going to have to rely on them,” Bradley said. “The ones that are working now will have the edge over the ones who aren’t come the fall.”

Watching a lot of film is one of the things that coaches can do to help prepare for the fall.

Bradley has even gotten in contact with other coaches throughout the state and bounced ideas around of how they might be handling the current situation.

The lack of a spring game, will put even more emphasis on 7-on-7 drills and organized team activities during the summer.

Being less competitive is just one of the consequences that could take place if players do not keep up with training while at home.

“You may see a lot more injuries and health concerns that pop up,” Morrison said. “Football has gotten to where it’s a year-round sport when it comes to conditioning.”

Morrison also believes that team chemistry might suffer, because spring practice was not only about preparation but also gave the players a chance to be around and get to know each other better.

“I miss my boys [players],” Morrison said. “You see the strides guys have made and you would hate to see that come to an end.”

Take one look at Thorsby junior Sawyer Sellers and it is no surprise he is The Clanton Advertiser’s 2020 Boys... read more