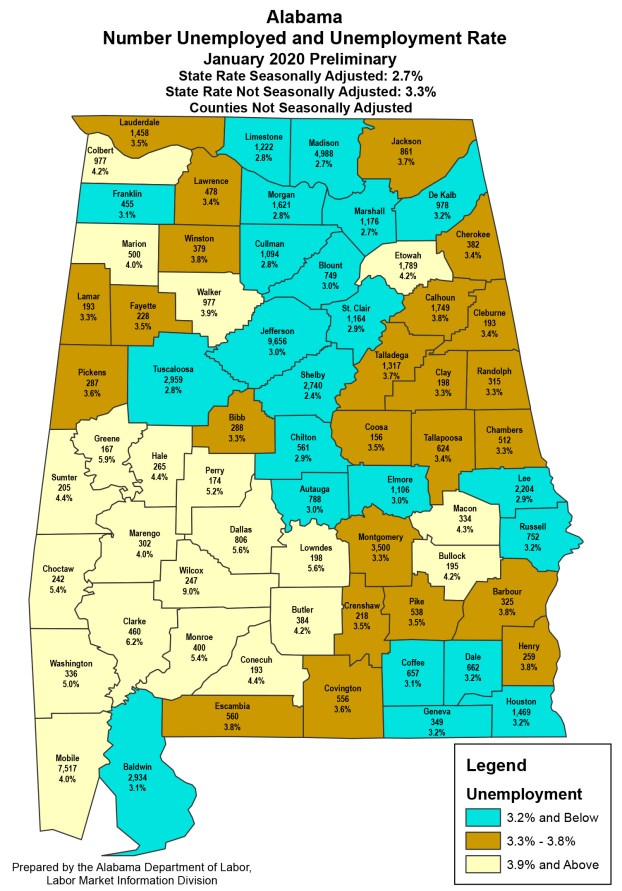 Chilton County posted an unemployment rate of 2.9% for the month of January.

That number is almost a full point lower than the 3.8% posted during the same month in 2019.

The January mark went up slightly from the 2.3% Chilton County closed out 2019 with during the month of December.

As far as the state of Alabama goes, the preliminary, seasonally adjusted January 2020 unemployment rate remains at a record low 2.7%, unchanged from December 2019, and well below January 2019’s rate of 3.6%.

“We are pleased to be able to maintain last year’s record low unemployment rate in Alabama,” said Governor Kay Ivey.  “We will continue to focus efforts on job creation and workforce development, and remain hopeful that the economic good news will continue into the remainder of 2020.”

Chilton County’s civilian labor force was 19,635 in January, with 19,074 people listed as employed and 561 listed as unemployed.

According to the a release from the state labor department, January’s numbers represent an over-the-year increase in employment of 27,893, with the monthly total registering 2,186,364. The number of people counted as unemployed measured 61,114, a new record low, and represents an over-the-year drop of 18,346.

Shelby County once again posted the lowest rate of the 67 Alabama counties with a 2.4%, while Wilcox County rose to a 9.0%, the highest mark.

The February numbers that come out later this year will likely remain low. However, the March figures after that may begin to show the impact the coronavirus has been having both locally and nationally.

The Chilton County Department of Human Resources has remained fully staffed and operational throughout the coronavirus pandemic, and that is... read more