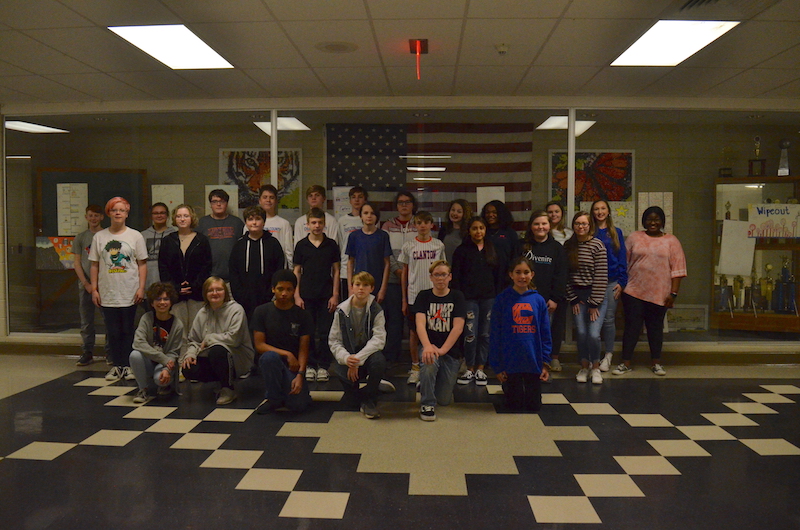 Superior is the highest rating that can be in given.

Judges use a rubric to grade bands on tone, rhythmic content, melodic content, tuning, stage presence/appearance and musicality on each of the songs they played.

Many of the students, mostly eighth graders, had played in the band during last year’s assessment. However, this year, the students were being critiqued at a higher level and required to play more advanced pieces than the previous year.

“I’m just real proud of them to be able to do that two years in a row is difficult,” band teacher Casey Clark said.

The band will receive a trophy and a plaque for their accomplishment.

“It means a lot to me for the simple reason of the consistency of how the kids are playing that they are getting better every year,” Clark said.

Scores were given for three songs that had been practiced ahead of time and sight reading on a piece that the group had never played before.

“I’m really happy that we got all superiors,” Isabella Linquist, who plays the alto saxophone, said.

Kadence Brown, who plays alto saxophone, said she enjoyed working together as a band for the performance.

“We have worked really hard for it and had a lot of help from people,” Kadence said.

“It was a lot harder but in a way it seemed easier because we had done it before,” Claire Williams, who plays the clarinet, said. “The music was a lot harder, but it was also a lot more fun to play.”

“I was really nervous, but I knew how well we did last year and how hard we worked,” Alex Robinson, who plays percussion, said.

He said he felt that the band was going to do well.

“It was a little scary at first, but once we go on stage, we did an outstanding job,” Kadence said.

Kadence said her favorite song the group performed was “’Arabian Dances” by Roland Barrett “because of the excitement of it.”

This was also Isabella’s favorite because it was fast.

Anna said her favorite song was “Engines of Resistance” by Larry Clark.

“It was really fast, and it kind of described how life really is because it is fast and unexpected and you don’t know what is going to happen,” Anna said.

Alex said this was his favorite song also.

“In the beginning, it is the winds and the brass playing first and then it’s the percussion, so it feels like they are fighting, then at the end, they all play together —so they made up,” Alex said.

Malley Cox, who plays the French horn, said her favorite was “Summit Fanfare” by William Owens.

“It has been different from all other marches and it is a song that is very separated,” Malley said.

Claire said “Arabian Dances” was her favorite because there is a clarinet solo at the beginning of it. She said the timing on the song was challenging.

Joseph Allen, who plays the clarinet, played the solo for this song during the assessment. He said this was his favorite song that the group performed because it started slow and built from there. Having a solo also made the assessment challenging for him this year.

He said it was a good opportunity to show how they had improved as musicians from the previous year.

Anthony Robinson, who plays percussion, said “Arabian Dances” was his favorite because he played the timpani (also known as kettledrums).

“It was the easiest, and I had more fun with it,” Ayla said.

“It was more difficult than last year,” Anna Cleckler, who plays the French horn, said.

She said the difficulty level had increased because they were more experienced playing their instruments than the previous year, so more was expected.

“The thing I enjoyed most about it was that we all play together as a group better than we do as individuals,” Anna said. “We bring out the best in each other.”

Alex said he enjoyed how well the group got along with each other.

Isabella enjoyed spending time with the other members of the band.

“A lot of times when you are in band it becomes like a family to you after a little while,” Isabella said

She said “the music was harder” than last year with some faster parts requiring more practice.

Ayla, who plays the bass clarinet, said she enjoyed “learning the new music and hanging out with my friends” while preparing for the assessment.

Anthony said “trying to learn all of the music” was a bit challenging.

Preparation for the assessment had begun in September.