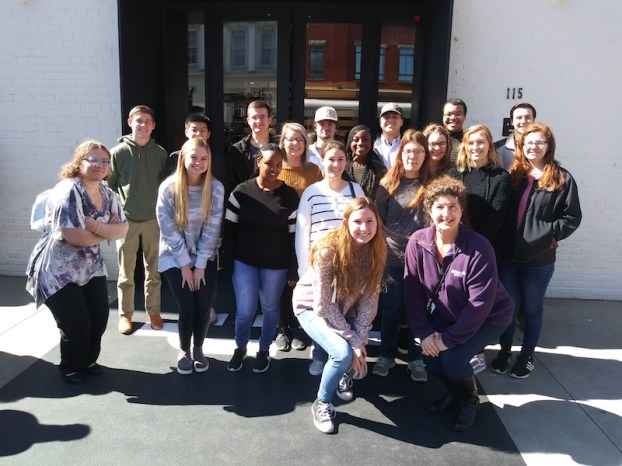 “​I like students to take this field trip to get a better sense of the historical implications surrounding race, class and gender in Alabama through history,” instructor and Associate Dean  Ashley Kitchens said. “As a literature class, it is important to understand the context surrounding texts we read, and this museum takes that context and connects these students directly to the state they live in.  It is important to see the incredible work the Equal Justice Initiative has done building a museum with a variety of displays (visual, holographic, interactive, personal, factual) that examine the past, present and future through the lenses of both horror and celebration of lives lost and lives won.”

This was her fourth time to the museum, and she said she still discovered something new.
“This particular visit, I spent more time examining the newspaper ad queries on the wall of people looking for their loved ones after emancipation,” Kitchens said. “The ads were both heartbreaking and touching at the same time because they illustrated the continued strong bond of family members reaching for their loved ones even after the institution of slavery had tried to sever their connections.”

Excerpts from letters and journals on the walls while he was waiting in line caught the eye of student Gene Lucas.

“These were written by former slaves or from their perspective, and they describe how their families were ripped apart by slave owners selling them and deliberately misplacing them,” Lucas said. “There was even a quote that said ‘Slavery is the next thing to Hell.’ It was sickening to know that my ancestors’ families were literally being ripped apart for profit because of slavery. Especially in the South — places like Montgomery and Selma — it was horrific to read.”

Further along in the museum was an interactive display, Lucas said, where visitors would “pick up a corded phone and be able to individually listen to someone black who was falsely accused and incarcerated.”

“You got to hear their story and learn how they were mistreated by the justice system and the police officers in the prisons and jails,” Lucas said. “It was an eye-opening experience that shined a light on the wrongful mass imprisonment problem affecting African Americans and black people in the United States.”

For Kitchens, her visits to the museum remind her that there are still people living under oppression.

“Poverty creates a ceiling that too many people cannot break through, and as such, classes and races of people are continually kept in an oppressed state,” Kitchens said.

The museum also shows her how the past has impacted the present.

“This museum always makes me question the choices of people in times past, and in today’s present,” Kitchens said. “Why was lynching an acceptable form of “entertainment”?  Why is segregational language still in the Alabama Constitution today? Why have voters in the recent modern day (2004 and 2012) voted to keep this kind of language of restriction part of it? Why are people afraid to examine the past to be able to create a better future?  This museum is a large step in the right direction of self and society examination.”

“I vividly remember seeing a wall of esteemed black leaders and activists who fought for the cause,” Lucas said. “It was amazing seeing all of the faces of the people who fought for our freedom and civil rights. Among these were Shirley Chisholm, Harriet Tubman, Malcolm X, Rosa Parks, and of course Martin Luther King Jr. It was one of the few moments that made me tear up, in a good way. It was beautiful; I was so proud of every single person on that wall. It’s because of them and their courage that the world changed for the better.”

The museum explores an aspect of history that many do not like to dwell on from varying perspectives.

“This museum puts the facts in your face and you learn things that stay with you and change your perspective,” Lucas said. “For example, interracial marriage literally used to be a crime … laws that stated that you couldn’t be with someone because they were simply a different skin color— it was absurd! It really drove home the fact that just because something is legally in place, that doesn’t mean it’s morally or ethically correct. We’ve come a long way, and this museum really made that point clear.”

The museum tour ended with a display of “thought-provoking questions” highlighting that there is still more work to do.

“I think it all starts with educating yourself, understanding the facts, and treating one another the way you would want to be treated,” Lucas said. “I really recommend visiting the Legacy Museum!”