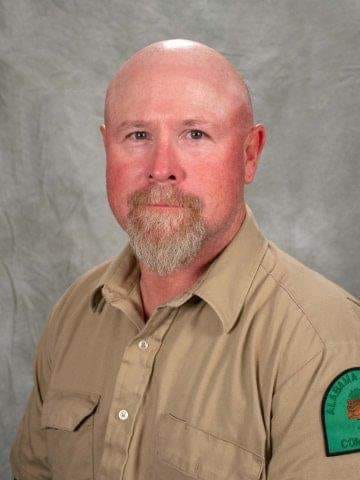 James Hall had been a forest ranger in Chilton County for about a year. (ALABAMA FORESTRY COMMISSION)

A single-vehicle crash on March 3 claimed the life of a Chilton County forest ranger.

According to the Alabama Law Enforcement Agency, James Hall, 43, of Prattville was killed when the 2008 Ford F-250 he was driving left the roadway and struck a tree before catching fire. Hall was pronounced dead at the scene.

The Alabama Forestry Commission issued a statement on social media after Hall’s passing that was expanded upon after a gofundme page was set up in Hall’s honor.

“It is with deep sadness that we acknowledge the loss of a member of the Alabama Forestry Commission family,” said the AFC on the post. “James Owen Hall, an employee assigned to the Chilton County office, was killed in an automobile accident during heavy storms on Tuesday, March 3, 2020. He was 43 years old.

Anyone wishing to donate can visit gofundme.com/f/james-owen-hall-memorial-fund.

“My husband LOVED his job and was so happy with AFC!” Theresa Hall commented on AFC’s post about her husband’s passing. “It was his dream job! I love him so much and I am thankful for the AFC family and friends! Thank you all for your prayers and support as we all navigate through this pain.”

On March 5, the Alabama State Senate and House of Representatives both recognized the passing of Hall with a moment of silence. Sen. Clyde Chambliss and Rep. Van Smith read a memorial for Hall before their respective branches.