Beeman highlights character of a champion 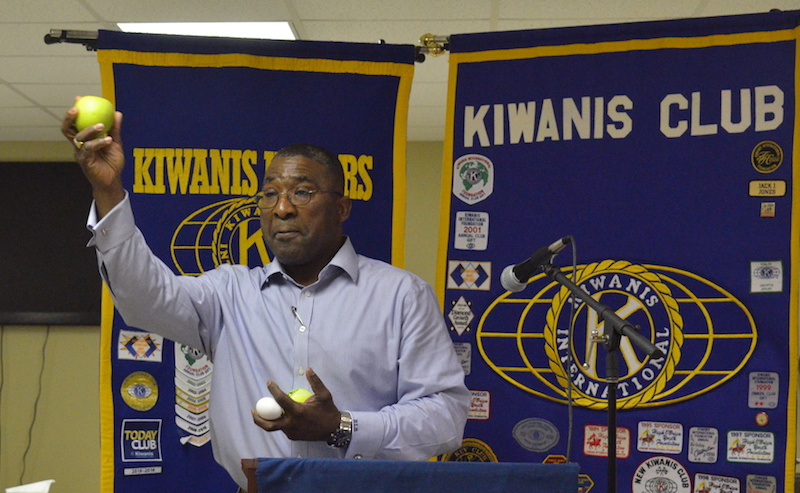 Robert Beeman, an attorney and three-time football Academic All American, spoke to the Clanton Kiwanis Club about the character traits of a champion on March 5.

“In whatever you do, be a champion,” Beeman said. “… We should all seek to be our best.”

Beeman defined character as “what makes a person who he or she is.”

The ability to overcome adversity was the first trait of a champion that Beeman talked about.

“I think perhaps the best indicator of how well a person will perform and how high they are going to rise in life is adversity quotient — how much difficulty, adversity if you will, can you sustain and not become disheartened, not want to give up,” Beeman said. “We all have to deal with adversity, and the person who is successful that is an individual that can handle adversity and still manage to rise.”

Beeman illustrated how people handle adversity using an egg (some crack and fall apart), an apple (some bruise and become toxic) and a tennis ball (some bounce back.)

“As you go through adversity, be more like the tennis ball,” Beeman said.

He said champions must work hard.

While there are many things a person cannot control, Beeman said individuals can control how hard they work.

Champions also hold themselves accountable to do their best.

He said consistency is a key to moving forward in life.

“Always be persistent whatever happens push through it,” Beeman said.

He emphasized that simply being talented was not enough.

Controlling how one responds to events they cannot control is also a trait of a champion. Beeman said keeping a good attitude is crucial. He quoted a John Hopkins research study which stated that having a positive attitude decreased the likelihood of a heart attack by one third in those genetically likely to have a heart attack.

“Have a positive inner circle,” Beeman said. “Think about the people that you hang around … be around people who can help you get where you want to go.”

He said he was thankful to have had people in his life that did this for him.

He encouraged those present to “make each other better.”