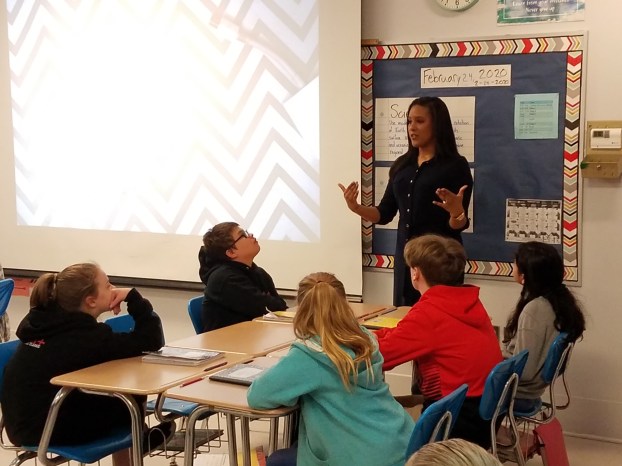 Meteorologist Jessica Swindle spoke to students at JIS during a visit to the school on Feb. 24. (Photo by Anthony Richards)

Jessica Swindle’s career path to becoming a meteorologist began when she was a senior at Jemison High School.

She currently works as a meteorologist at WAFF 48 in Huntsville but came back to talk to Jemison Intermediate School students during a visit Feb. 24.

“Any job is challenging and fun,” Swindle said. “It’s all about the mindset, and making sure that you choose a job that to you is worth the bad days because they are going to come.”

Swindle informed students that she enjoys riding around in the station’s storm tracker van and using the tools and software available to track the storm, even more than being in studio.

A popular question by students was about what her favorite part of the job is.

“When I’m actually in front of the green screen delivering the forecast,” Swindle said. “That’s when you get that adrenaline rush. It’s so fun to be on camera talking about what I know and what I’m good at.”

Both Swindle’s parents were teachers, so she initially thought about following that similar career path.

“It wasn’t until I was actually filling out college applications my senior year that it became real to me that I was taking steps to become something I didn’t want to become,” Swindle said. “I prayed about it, and meteorology just came to me.”

Her choice to pursue meteorology became even more clear once she found out that Reynolds Wolf, a meteorologist for CNN at the time, was scheduled to do a presentation at JHS.

According to Swindle, Wolf’s visit was like a sign from God, because Wolf was able to answer all of the questions she had about the career that she was unable to find by searching the internet. 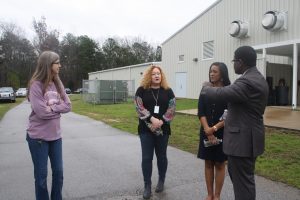 Swindle speaks with JIS Principal D.J. Nix, STEM teacher Rachel Mims and Sylvia Moore during a tour of the school. (Photo by the JIS Yearbook Staff)

“At the time, I was a little afraid because I had not seen many female or black meteorologists at that time,” Swindle said. “His enthusiasm about meteorology made me very stern about becoming one.”

The reassurance that Wolf gave Swindle is something that she hoped to provide while speaking to JIS students.

“I want to inspire them through my story to go after whatever their interests are,” Swindle said. “I commend Mr. [D.J.] Nix (JIS principal) for exposing these kids to so many different options. It’s one thing to learn about science, but to have a meteorologist come and actually talk about weather, how cool is that? Especially here in Chilton County.”

JIS recently introduced its weather station in front of the school to go along with the continued emphasis on its outdoor classroom concept.

“People know how to look up at the sky, but to know the details of weather and taking a deeper dive with the tools available is huge especially for this age group,” Swindle said.

Swindle’s appearance was part of the school’s celebration of black history month.

“JIS is at a place right now, even our students are talking about being visionaries,” Nix said. The teachers at JIS want to push me even further. That is scary as a principal, but I will support their creativity and wanting to touch young people in a way that’s changing education,” Nix said.

By JOYANNA LOVE/ Senior Staff Writer Seniors at Chilton County High School reflected on their time at the school and... read more