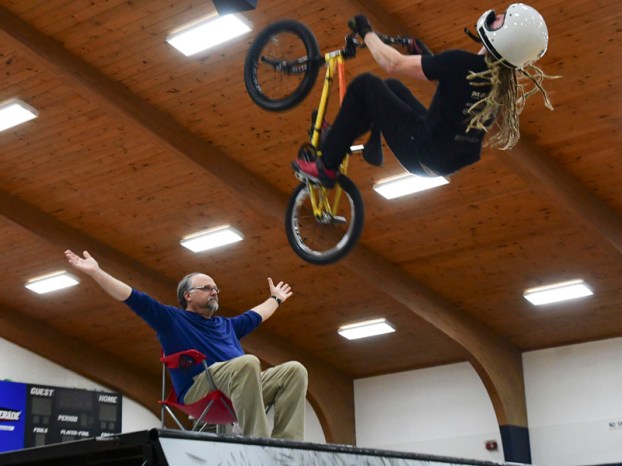 JHS teacher Ronnie Holsombeck can only sit and watch as Zach Newman begins to flip backwards over him. (Photo by Anthony Richards)

Students at Jemison High School learned about bullying statistics while also enjoying some jaw-dropping BMX tricks during a presentation Feb. 20.

The show was part of a high school tour campaign put on by a partnership with ASA Entertainment, the No Place for Hate Anti-defamation League and the United States Marines Corps.

“We go into schools all over the country,” event emcee Dan Sieg said. “Anybody can come in as a D.A.R.E officer and talk to the kids, but they tune out pretty quick. With this, we have my speeches and talks that are also mixed in with the riding. It’s a nice mix of engagement.”

Wade won gold in BMX Big Air at the 2013 X Games in Los Angeles, while Meyer has three X Games gold medals of his own in the BMX flatland category. 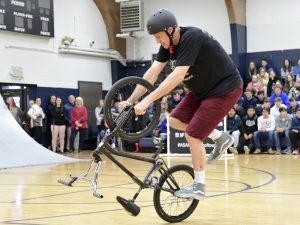 Trevor Meyer demonstrates to the crowd that there are multiple ways to ride a BMX bike. (Photo by Anthony Richards)

Place is in his second tour with ASA, but he has been doing tours with similar companies for the past decade.

According to Place, doing these types of shows reminds him of how he was initially introduced to the sport of BMX.

“It has come full circle for me, because the first time I saw bike riding like this was at a state fair in a show very similar to what we do here,” Place said. “Being able to put our sport in front of kids who may have never seen a bike go upside down is a big thing for me.”

However, throughout the thrilling exhibition was the constant message against bullying and the seriousness with which it can affect someone’s life.

“It’s an important message for all of us, because I was picked on a bit in high school and middle school,” Place said.

According to the No Place for Hate Anti-defamation League, 36% of high school students and 31.5% of middle school students have personally witnessed some type of bullying at school. 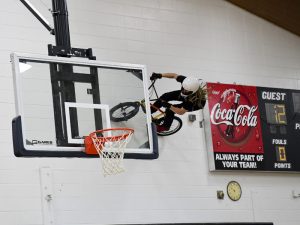 Nearly half (47%) of those high school students told nobody about the bullying they witnessed.

“My favorite thing hands down is truly being able to touch the kids to where they are actually listening,” Sieg said. “There are those handful of kids every single show that come up afterwards to say thank you. If I get through to one kid per school, that’s five kids a week that I may have helped change their life so to speak.”

Place encouraged anybody who was in attendance to challenge themselves by committing time to learning a hobby, whatever it may be.

“You never know until you try,” Place said. “If you put yourself in that situation, you never know where you’ll be years from know. I never thought that I would be here making money riding my bike.”

He acknowledged that the toughest part is the start of something new, but also promised that the persistency of fighting through the adversity in the beginning will have a positive influence in the end.

“It’s a weird learning curve, because for maybe the first couple of years you’ll fall a bunch, but one day that learning curve will just spike,” Place said.

The drama club at Jemison Intermediate School is in its sixth year of existence since Jillena Smets started the program.... read more