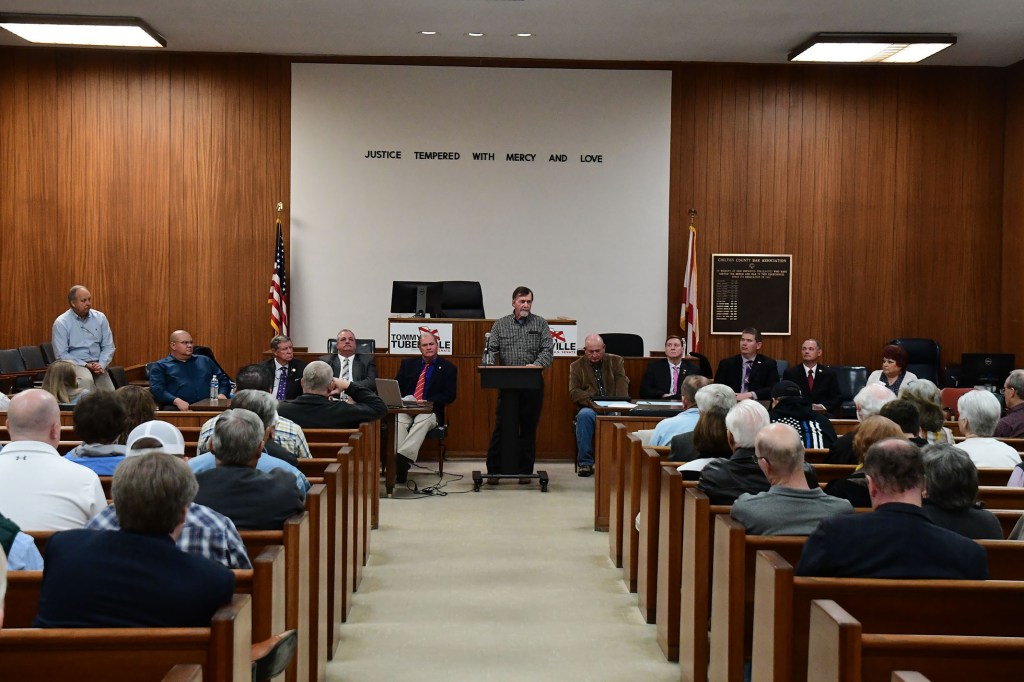 The 10 Republican candidates for Chilton County Commission were each asked to answer a series of questions during the forum. (J.R. TIDWELL/ADVERTISER)

Local and state candidates were given two to three minutes each to say something about themselves, why they are running and why they deserved a vote.

The biggest group of the night were the 10 Republican candidates for the Chilton County Commission.

As the biggest local election, these candidates were instead asked a series of questions and allowed time to answer.

The first election represented was the race for the U.S. Senate seat currently occupied by Sen. Doug Jones.

Though each of those candidates have made trips to Chilton County recently, none was able to make it to the forum that night.

They are running against Stanley Adair, Arnold Mooney, Roy Moore and Ruth Page Nelson as well.

State Sen. Cam Ward of Alabaster, who’s district includes Chilton County, is running for Associate Justice of the Supreme Court Place No. 1 along with Greg Shaw.

Ward spoke of his candidacy, but also notably said that “there’s not a Republican on this ballot that’s not better than the other side” speaking of all the various races.

Next to speak was Matt Fridy, who is running against Phillip Bahakel for judge of Place No. 2 on the Court of Civil Appeals.

Next up was a representative for Mary Windom, who is running against Melvin Hasting in the primary for judge of the Court of Criminal Appeals Place No. 1, while Beth Kellum spoke of her candidacy for the court in place No. 2. That race includes Jill Ganus and Will Smith.

Incumbent Tim Little and Jeremy Penley were next slotted time to speak of their race for Chilton County Revenue Commissioner, and Powers was granted time to ask for a vote a vote in her bid to become a delegate for President Donald Trump.