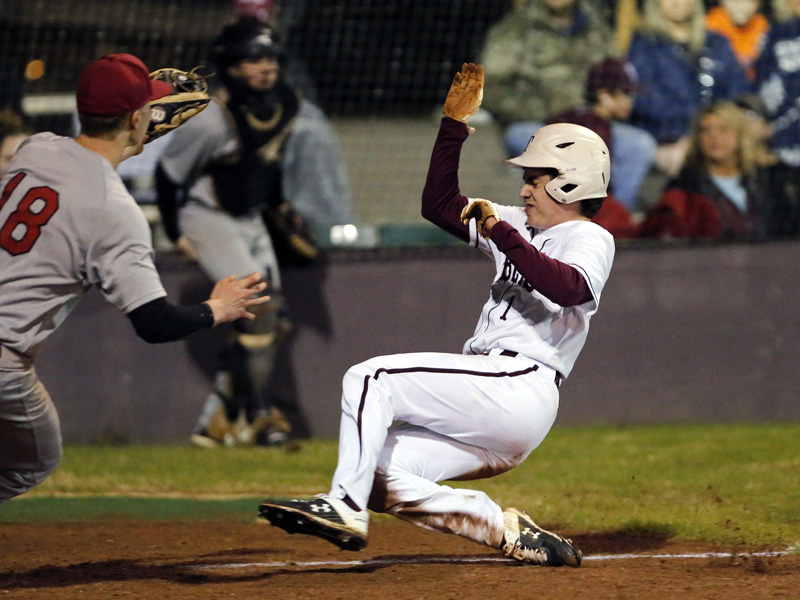 Thorsby's Jacob Lockhart slides safely into home for one of Thorsby’s eight runs against Sylacauga Feb. 18. (Photo by Brandon Sumrall/Special)

The Thorsby Rebels improved to 2-0 on the young season with a big 8-2 win over the visiting Class 5A Sylacauga Aggies Feb. 17.

A three-up-three-down inning by Thorsby starting pitcher Tanner Jones and the Rebels defense through the top of the first would give way to the home half of the inning where Thorsby would put the first runs of the game on the board.

Leadoff walks to Jacob Lockhart and Chandler Stephens would set up an RBI walk by Cristobal Sanchez. Shortly after, Andrew Edwards was hit by a pitch to plate Stephens and give Thorsby an early 2-0 lead.

The Aggies had a pair of base runners to start the second inning, but it would result in no runs for the visitors, as Jones would set down the next three Sylacauga batters via strikeout.

Meanwhile, the Rebels would tack on one more in the home half of the inning on a wild pitch that scored Lockhart to make it a 3-0 Thorsby lead. 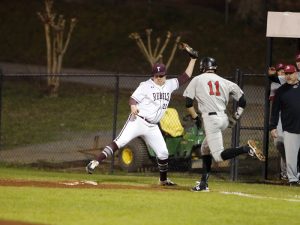 Thorsby’s Noah Littlejohn stretches to get an out at first base. (Photo by Brandon Sumrall/Special)

The Aggies would cut the lead to two in the top of the third, while Thorsby would go in order sending action to the fourth with the Rebels holding a 3-1 lead.

A one-out walk to Stephens would set up a two-run home run off the bat of Jones and a double by Tucker “Dale” Patterson helped set up an RBI walk to Luke Davis and an RBI single by Remington Taylor made it a 7-1 game.

The Aggies would load the bases with no outs to start the sixth inning, but while a walk would plate one Sylacauga base runner, three strikeouts by Patterson would minimize the damage.

Jones got the start on the hill for Thorsby and threw three innings, while allowing one hit with eight strikeouts.

He also led the Rebels at the plate with a 2-for-4 performance that included a single, homer and two RBIs.