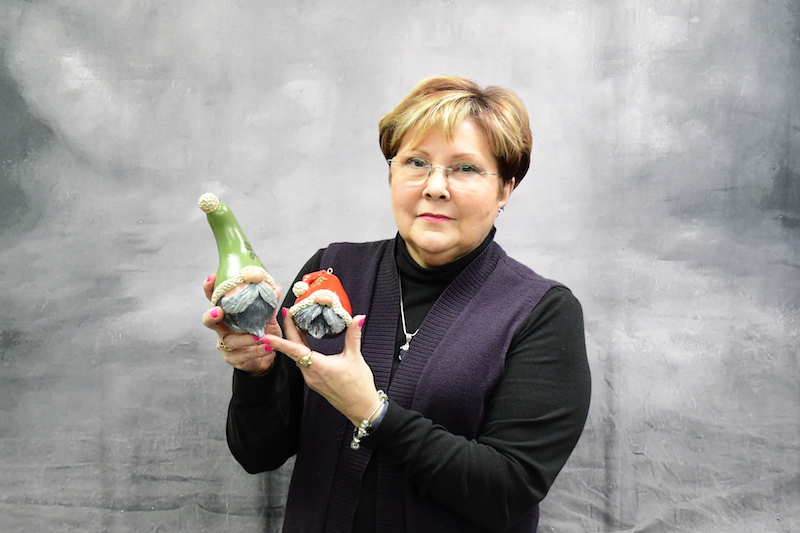 Karen Stone displays the project she will be teaching a class on at March Gourd Madness this year. (JOYANNA LOVE/ ADVERTISER)

Classes during the upcoming March Gourd Madness festival will give artists of all skill levels a chance to learn more about this unique art form.

Local artist Karen Stone will be teaching a class on making gnomes and Santa ornaments out of gourds.

“When you are looking for a project to do with someone who has maybe never touched a gourd before, you have to have things that are fairly easy, but at the same time you want it to be something that will catch the eye and is popular,” Stone said. “This project does both.”

The project will also introduce attendees how to use quikwood to model features for the characters.

Asian pear gourds will be used for the project.

“Gourds are not plentiful here in Alabama,” Stone said. “We don’t have the right growing season for small gourds.”

She said western states such as California and Nevada have a longer growing season and can grow more gourds. A variety of gourds will be for sale during the festival.

Stone has been doing gourd art for at least 25 years.

“Shirley Lawrence and her mom approached me about painting some gourds,” Stone said. “I’ll be honest, I knew nothing about gourds … I told her, of course, I would try, but I wasn’t sure.”

Stone painted approximately 28 gourds with scenes from the family’s past, including a tractor, barn, cow, etc.

“She gave them to her siblings as a reminder of their old homeplace,” Stone said.

After that first project, Stone went on to expand her skills and talent with gourds. She has even painted a portrait or two on a gourd.

Prior to plunging into the gourd patch, Stone studied oil painting with Orville Allen for 23 years. She called getting into his class “life changing.”

“From there, I branched out into acrylics and … watercolors,” Stone said.

Her initial interest in art began at a young age.

“As a child, I was sick a lot,” Stone said. “I had rheumatic fever twice, and it affects your legs, so you don’t walk real good. It’s something you don’t hear about much anymore, but it was pretty prevalent in my childhood.”

Looking for things to do while she was in bed led to drawing.

Even after Stone started painting gourds, she did not meet anyone else who did art with them until about 20 years later.

It was through meeting Mack Gothard that she connected with other gourd artists. Many other art styles can be used on gourds.

“(We do) the same things other art groups do,” Stone said. “Our canvas just happens to be something we can’t control the shape of or the looks of. Some will be light, some will be dark.”

After she joined Gourd Exposure, members of the group encouraged Stone to try other art projects beyond painting.

Later, she was encouraged to teach a class.

She was a bit apprehensive at first because she had not taught a group of strangers anything about gourds previously.

“It’s addictive,” Stone said. “You see somebody else master something, and they smile and are proud of it, and all of a sudden you are proud of it too for them.”

She said each person in the gourd group has a different project they specialize in with gourds, such as birdhouses, chickens or sea creatures.

Her husband James has also become a gourd artist.

Other gourd project classes being offered during March Gourd Madness include a necklace, box, purse, birdhouse, sea turtles and other decorative pieces.

Information about each of the classes, cost and what students would need to bring is available at www.marchgourdmadness.com.

Stone said she enjoys the festival each year because of the opportunities to talk with other artists.

at the Clanton Conference and Performing Arts Center, 1850 Lay Dam Road in Clanton.

March Gourd Madness is sponsored by the Chilton County Arts Council and the City of Clanton and hosted by the Central Alabama Gourd Exposure Patch.