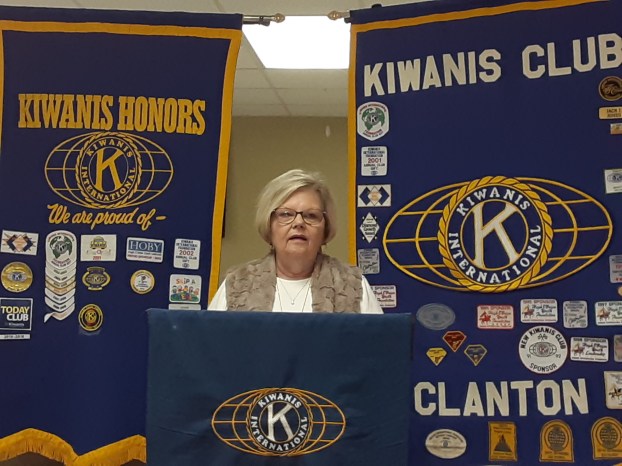 The Clanton Kiwanis Club received information and a financial overview of the city from City Councilwoman Mary Mell Smith during the Feb. 13 meeting.

Smith has served on the Council for the past 20 years. Back then, the budget for the city was just above $5.8 million. This year’s budget is $12.5 million.

The city is set to pay off a bond issue in September from a 1998 project to bring water from Lake Mitchell into the city, Smith said.

“We have been paying about $30,000 a month on this bond issue since 1998, but it will be paid off,” she said. “I don’t know what in the world we would have done if we had not run that water from Lake Mitchell into town.”

The only other long-term debt the city has is paying off funds borrowed for the construction of Clanton Conference and Performing Arts Center.

She said the “very nice facility” was something that the whole community could “be proud of.”

A recent water plant upgrade project is being funded by the city of Clanton and the Utility Board without borrowing money. Smith said the upgrades are being done ahead of expected growth. The city will contribute $ 4.5 million.

A future major project for the city will be the construction of another water tower. Smith said the city’s sewage plant will also need upgrades in the future.

This year, the city is planning on addressing some paving issues. Smith pointed out that Highway 31 is a state highway, so the city cannot pave it.

Bids have been taken for local roads in need of being paved and about $1 million is expected to be spent on the project.

Smith also highlighted the parks and recreation opportunities in the city. Smith said she has been a part of efforts trying to get a splash pad installed in front of the pool, but applications for grant funding for the project have been unsuccessful so far.

The city-owned shopping center Park Plaza was highlighted. Smith said Senior Connection located in the plaza has more than 500 members who enjoy various activities in the building. A Dollar General is also coming to the former Fred’s location.

She said even though the members of the council are elected by a specific district, she has tried to help anyone who has asked her no matter what district they were in.

During the presentation, Smith stressed the importance of every person in the community participating in the upcoming census.

“That determines an awful lot. We want everyone to be sure and be counted,” Smith said. “We could possibly lose a Congressional seat. We are open to grants from the state and federal government according to your census data.”

Smith is on the census committee and said in the last census only 72 % of the population participated in the census.

The official counting will begin in late March or early April.

“You can do it online which makes it easy,” Smith said.

There will also be people going door to door trying to ensure that those without internet access can participate.

“All of the information that you give to the census people is confidential,” Smith said.