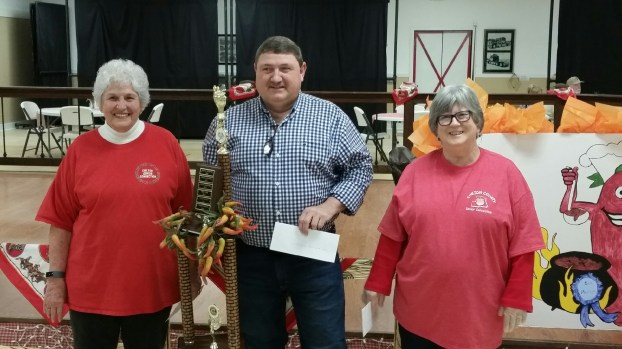 The event drew 15 competitors from across Chilton County, who each vied for chili recipe supremacy.

Though many entered, only one could win, and that person was Mark Jones. Jones had the final entry brought to the judges for testing.

As his sample left his vessel, he told the runner “they’ve had the rest, now they can try the best,” speaking of the awaiting judges.

His words turned out to be prophetic, as his chili was indeed selected as the top fare.

The competition was fierce, as the three judges compared each entry based on criteria such as smell, taste, consistency, spiciness and color.

Each criterion received a total of 1 to 10 points, and the entry with the most points when all three judges combined their tallies was crowned the victor.

Along with a trophy, Jones received a $100 prize and bragging rights for an entire year. Spradling won $50, and Teel took home $25. While not bragging rights per se, Spradling and Teel left with talking points of their performance.

“(Event) turnout was great this year,” said Senior Connection Director Vanessa McKinney. “The community really came out and supported us. We had 17 vendors in our health fair, that was really good.”

McKinney said that Senior Connection raised around $1,650 in the annual fundraiser, and given its popularity the event will continue to take place in the future.

“It’s one of our most supported fundraisers,” she said. “Fundraisers are what keep us going.”