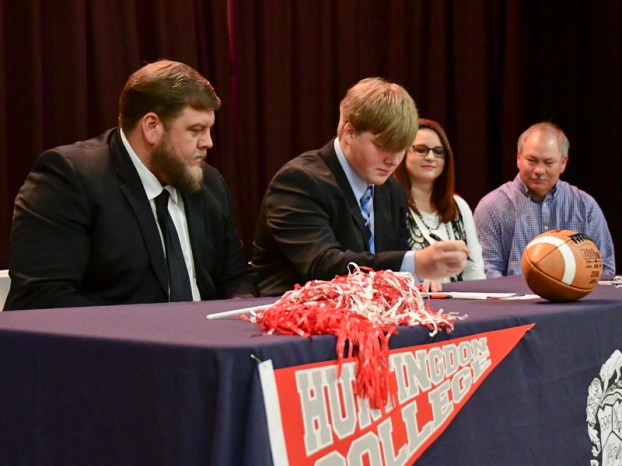 Jemison senior lineman Chase Lang will be continuing his career after signing to play football at Huntingdon College in Montgomery Feb. 5.

Lang made the signing official on the stage of the Jemison High School auditorium in front of friends, family and teammates.

According to Lang, it was a day he has been looking forward to for quite some time.

He thanked defensive line coach Josh Tatum for helping to push him to the point where he needed to be to play at the next level.

Tatum served not only as Lang’s position coach but also worked with him first-hand as strength and conditioning coach.

“It was special seeing the way that he came in each day with his drive and focus,” Tatum said. “Lazy was never in his vocabulary.”

According to Tatum, Lang was at the school at 5:45 a.m. to lift weights prior to signing later in the day. 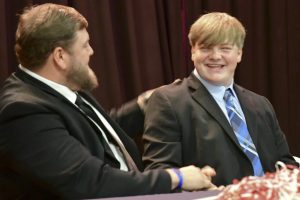 As part of the recruiting process, Lang was able to tour the Huntingdon campus and enjoyed the feeling he got when he was there.

“It is a wonderful place, and I like the buildings because they’re the original buildings,” Lang said. “It’s not a big school, and the teachers there really seem to care about the students.”

Lang played in the trenches on both sides of the ball during his high school career, but will shift his focus primarily to defense in college.

“They want me to play along the defensive line as a nose guard,” Lang said.

Nose guard is a position he has grown comfortable with after having played it for the Panthers in recent years.

According to Lang, there is a different approach and thought pattern when playing along the defensive front compared to the offensive side of the ball.

“On offense you attack, but also have to be aware of anyone attacking back, while defense is all about watching where the ball is going and adjust to that,” Lang said.

He started playing competitive football in middle school, but it was his sophomore year of high school when he started to realize he might have what it takes to play at the next level.

“That’s when I started getting the size to play [along the line],” Lang said.

However, Lang stressed that just having good size does not make a great player.

Over time, he has worked on finding the perfect combination of both speed and strength.

“You’ve got to have the mobility to get off the ball and go attack someone,” Lang said.

Lang was the first football signing during Blake Bradley’s tenure as head coach and something he hopes will inspire others in the future.

“It’s definitely been a catalyst for our program,” Bradley said. “It’s a good time to be a Panther, and I’m hoping we get a lot more [future signings].”

Maplesville’s Dorian Heard has been playing football since he was 5 years old and will be able to continue his... read more