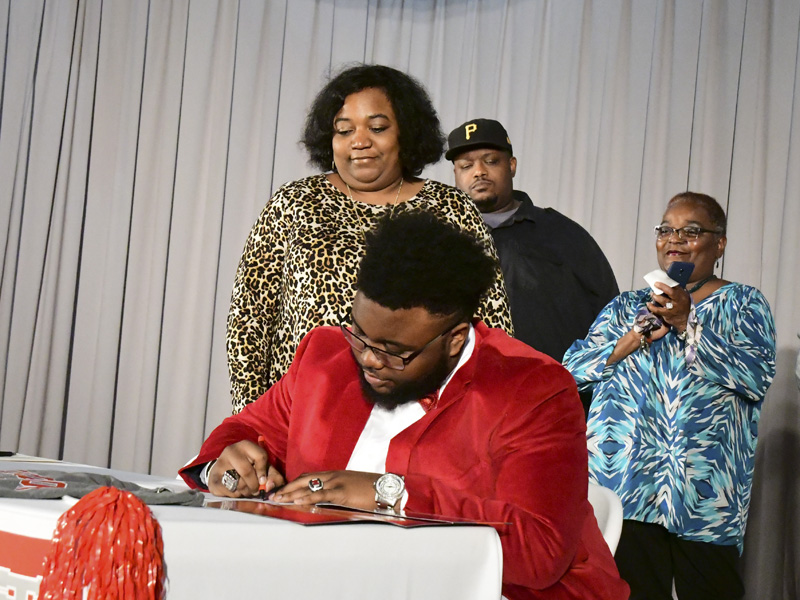 Dorian Heard of Maplesville signed to play football at Huntingdon during a ceremony Feb. 5. (Photo by Anthony Richards)

Maplesville’s Dorian Heard has been playing football since he was 5 years old and will be able to continue his love for the game a little longer after signing with Huntingdon Feb. 5.

He made one trip to the school to tour the campus, but that was all he needed to know it was the right fit for him and his future.

“It [campus] felt like home and reminded me a lot of Maplesville,” Heard said.

Heard had been in talks with the Huntingdon coaching staff since last spring when a representative came to Maplesville and talked to some of the students.

He primarily played along the offensive line in high school and will continue to do so at the college level. 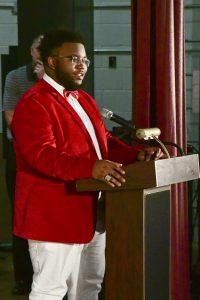 Heard informs the crowd in the school’s auditorium that he will be playing college football at Huntingdon. (Photo by Anthony Richards)

After talking with the coaching staff, Heard is confident that he will have the opportunity to compete for playing time from the time he first steps onto the practice field.

“They said they travel with a lot of linemen for road games, and they’ve had freshman start in the past,” Heard said. “The most important thing will be learning the playbook.”

The thing he is looking forward to the most about playing at the next level is enjoying the amplified atmosphere surrounding the games.

“I know it’s going to be different,” Heard said.

He has grown in a lot of areas as a player since first picking up a football, but he also understands there are aspects of his game as an offensive lineman that require relentless attention.

“It’s all about keeping my stance low and coming off the ball,” Heard said. “Hopefully, in college they can help me improve even more.”