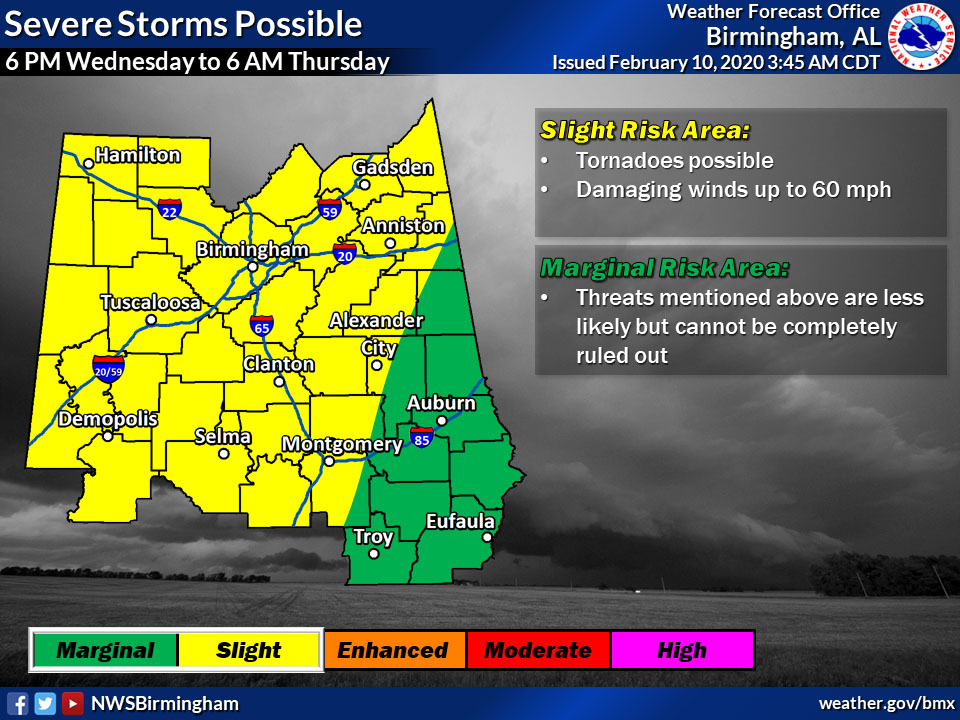 The National Weather Service in Birmingham listed all of central Alabama as receiving potential severe weather in a forecast Feb. 10.

Chilton County has been labeled as part of the “slight risk” area.

“Wednesday night through Thursday morning: severe weather is expected with damaging winds up to 60 mph and tornadoes possible,” said the NWS on social media. “Make sure you have multiple ways to receive information and have a plan if a warning is issued for you. We’ll post more information about (Feb. 12) as we get closer.”

This threat of severe weather comes during a week when rain in the forecast may cause issues with flooding, as the state remains waterlogged from the precipitation that fell over the last few days.

According to NWS, “… conditions are very wet across the region … with soil saturated, streamflows high, and dams nearing capacity in spots. Also, we are pre-growing season, meaning there is less vegetation to absorb the rainfall. Thus, the antecedent conditions suggest that rainfall of the magnitude forecast will cause significant and potentially life threatening flooding and flash flooding (Feb. 10) into tonight.

“The flooding over the next two days has the potential to be dangerous. Areas that don’t normally flood could very well see flooding. Don’t drive through flooded roads, don’t drive around barriers, and listen to law enforcement if you’re told to go or not go somewhere.”

In response to the amount of rain Chilton County and the rest of Alabama has received recently, and with more forecast, Alabama Power has opened up its spillway gates at dams on the Coosa River in order to let excess water flow through.

“Because our lakes will already be at higher levels as these next rains hit, we expect that several of the lakes will rise to levels above their normal summer levels,” said Alan Peeples with Alabama Power Reservoir Management. “We ask people around the lakes to pay close attention to weather conditions as we move into next week.”