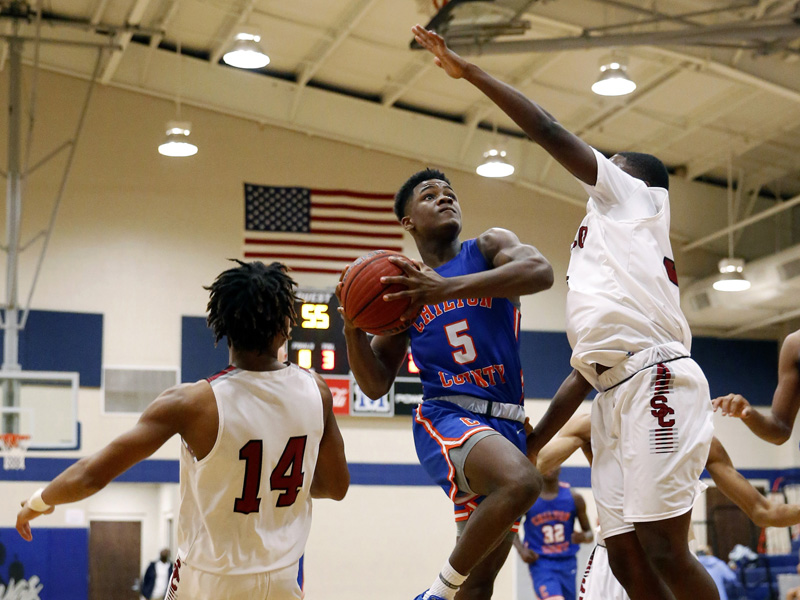 JaKobi Albert of CCHS drives the lane against Shelby County in the opening round of the area tournament Feb. 4. (Photo by Brandon Sumrall/Special)

The AHSAA Varsity Boys 5A area boys basketball tournament got underway Feb. 4 as the Chilton County Tigers came away with a 60-57 win against Marbury after a last-second missed 3-pointer at the buzzer

Both teams would struggle to find the basket during the first period as two minutes passed with both squads still searching for their first points.

Once the scoring started, a back-and-forth battle would ensue before a basket from Jakeveon Bolding and Shi Keem Laister would bring the first period to a close
with the Tigers holding a 15-8 lead.

Gabe Trentman and JaKobi Albert would make it a 9-0 Tigers run to start
the second period.

Laister put the Tigers out in front by 10, but a basket from Thaddeus McGinnis would start a 10-point run for the Wildcats that would tie the game at 23. 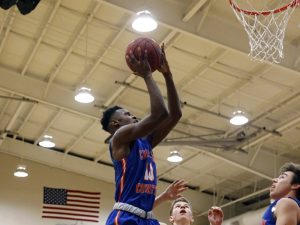 CCHS’s Shi Keem Laister hangs in the air as he looks to score. (Photo by Brandon Sumrall/Special)

A pair of threes by Bolding along with a basket from Larz Balfanz would send
the game to the half with the Tigers holding a 31-27 lead.

Five-straight eventual points from Byron Davis would give Chilton County a 14-point lead.

The Tigers led 45-37 heading into the final quarter, and Albert extended the Tigers’ lead to 13 early during the final period.

However, Shelby County started a comeback run, as it cut the deficit to one possession in the final seconds.

With just seven seconds to play the front side of a one-and-one by Albert would give Chilton County a three-point lead, while a last stitch 3-pointer from Shelby County found the back of the iron and the final buzzer sounded.

Bolding led the Tigers with 15 points and seven rebounds.
The Tigers advance to take on the Marbury Bulldogs on the road Feb. 6 for the area championship.

“The boys played hard. We started the year slow, but we just kept getting better throughout the year,” CCHS head coach Austin Moncus said. “Shelby County has a great team and they are coached very well. The leaders of our team stepped up with the help of some of our younger guys and we cam out with a good team win. I am extremely proud of our guys.”