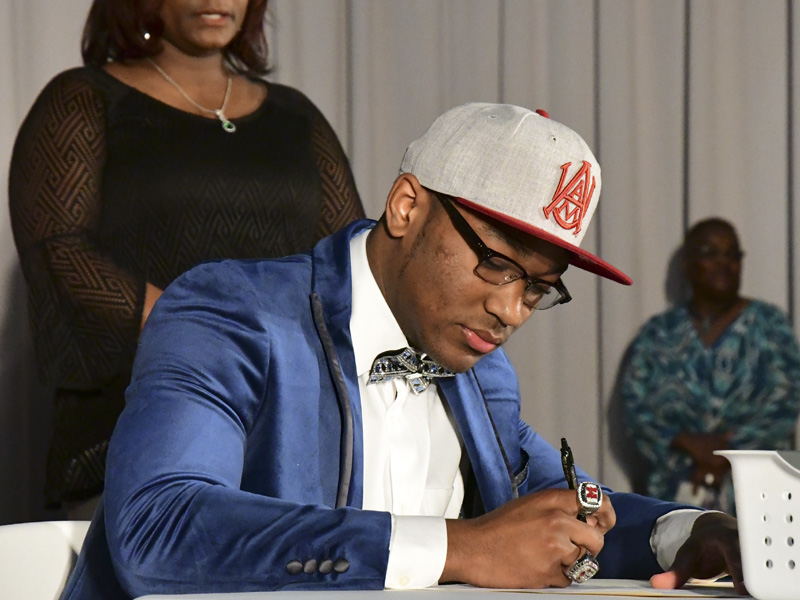 Maplesville’s Ryan Morrow signed a scholarship to play football at Alabama A&M during a ceremony Feb. 5. (Photo by Anthony Richards)

Ryan Morrow’s next phase of his life will continue to have football in it after the Maplesville senior signed a football scholarship with Alabama A&M on National Signing Day Feb. 5.

“It’s been a long ride, with a lot of days in the weight room and waking up early in the morning,” Morrow said. “There’s a lot of work put in behind the scenes that people don’t even see.”

Morrow was also considering UAB and South Alabama during the recruiting process.

However, it was his visits to the Alabama A&M’s campus that had the biggest influence on his decision.

“Everybody there just loves everybody,” Morrow said. “It’s a great family atmosphere.” 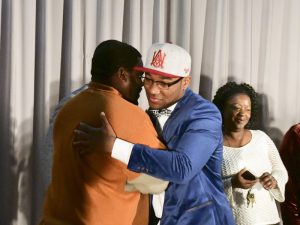 Morrow embraces his father after making his signing official. (Photo by Anthony Richards)

He also enjoyed his conversations with the Alabama A&M coaching staff, which was important to him because that will be a relationship that exists for the next four years.

“It [relationship] hit off from the start,” Morrow said. “They showed me love and made it clear that they wanted me as soon as I walked through the door.”

In college he will focus on being a running back, which is a position he was able to be highly productive at with the Red Devils over the years.

Morrow joins Terence Dunlap and Christin Brown as the latest in a line of MHS running backs that have signed scholarships to play at the NCAA Division I level in the last handful of years.

According to Morrow, his vision and ability to hit the holes as soon as they open is something he has continued to work on to get to that point.

He expects playing in big games, especially the Magic City Classic in Birmingham against rival Alabama State, to be among the highlights of playing in college.