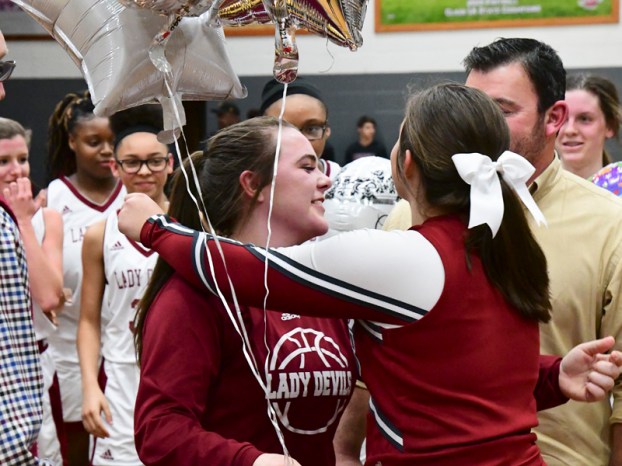 “This senior group has improved and it’s our first [boys] winning record in a few years,” Maplesville head coach Stacy McGehee said. “We’ve been playing good basketball this month, and they’ve really bought in. They work hard and they’re enjoyable to be with.”

A large crowd was on hand to give each player a gracious sendoff in the teams’ final home game of the season against Alabama Christian Academy.

The boys erased a near-double digit deficit early on en route to leading 39-31 at halftime.

The game’s momentum was flipped after Jackson Abbott buried a couple of timely 3-pointers and Robinson converted a steal into a breakaway layup.

The Red Devils extended and maintained the lead 57-47 heading into the fourth quarter and were looking in good shape to cap the emotional night with a victory. 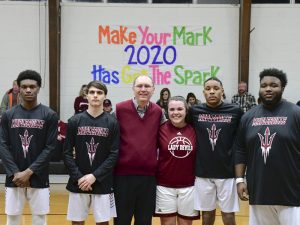 Maplesville head coach Stacy McGehee stands with five players who were recognized on senior night. He coaches both the boys and girls basketball teams. (Photo by Anthony Richards)

However, ACA got hot from beyond the arc in the final quarter and grabbed a 69-67 lead with 34 seconds remaining.

Maplesville was called for an over-and-back violation with 25 seconds left, which cost them an opportunity at a possible game-winning shot.

“I did a poor job in the last three minutes of putting us in position to win,” McGehee said. “The boys played hard. “We missed some shots and had some turnovers, but I have to do a better job of making us be successful at that crucial part of the game.”

However, even a 73-67 loss could not damper the night’s mood as several seniors had a productive scoring night.

Robinson finished with 10 points, while Hardy added seven and Stephens had five.

According to Stephens, he has been playing at the varsity level since 10th grade, and every time he got to play in front of the home fans was always something special.

“My shot and my confidence have really grown,” Stephens said.

Abbott had a team-high 28 points, including four 3-pointers.

In the girls game, Maplesville struggled to put the ball in the basket and lost 32-10 to ACA.

Shaveon Dunlap was the top points-getter for MHS with five points. Dunlap and Haven Smith both hit a 3-pointer on the night.

The Maplesville boys basketball team defeated Jefferson Christian Academy 66-53 on the road Jan. 28. Not only was it the... read more