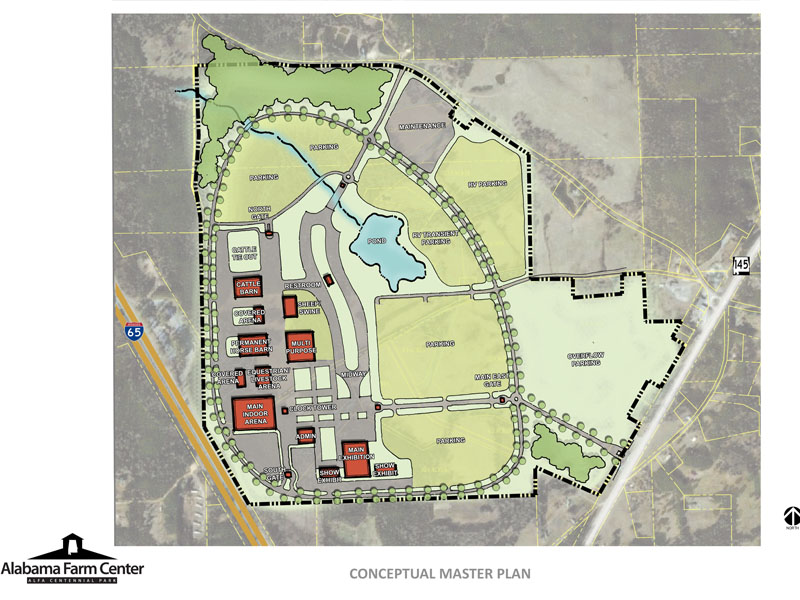 The Chilton County Commission created an agricultural authority that will have the power to bond and abate taxes within the perimeter of the site where the Alabama Farm Center will be constructed. (Contributed photo)

The Chilton County Commission approved a petition to establish an agricultural authority for the area at Exit 212 designated as the site of the coming Alabama Farm Center complex during its Jan. 28 meeting.

The authority will be a three-person board and will contain Van Forrester and David Heflin, both of which presented the petition, and Industrial Development Authority Executive Director Whitney Barlow.

It will have the power to bond and abate taxes within the perimeter of the Alabama Farm Center site but will not have reach outside of it.

According to Barlow, the concept behind the creation of the specific authority is to give ALFA a mechanism to use during the next stages of the project.

“This truly is a piece that we need to move forward,” Barlow said.

Commissioners met last week with the IDA‘s lawyer and discussed the proper procedures that would need to be taken as the project nears the phase of beginning construction.

The implementation of an agricultural authority was part of that discussion.

The agricultural authority will be restricted so that any money it raises can only be used on the project at hand, which in this case is the Alabama Farm Center.

According to Barlow, the environmental and commercial aspects are moving along.

Matthew Durdin, director of external affairs with the Alabama Farmers Federation, was on hand and provided the Commission with a project update during the work session prior to the meeting.

He informed the group that the standing is more promising than it was a month ago, due to a report from Terracon, a consulting engineering firm, which labeled five acres as wetlands within the Alabama Farm Center perimeter.

That report differed in comparison to the roughly 20 acres of wetlands marked in an initial report by the Army Corps of Engineers.

“I hope to have a groundbreaking pretty soon,” Durdin said.