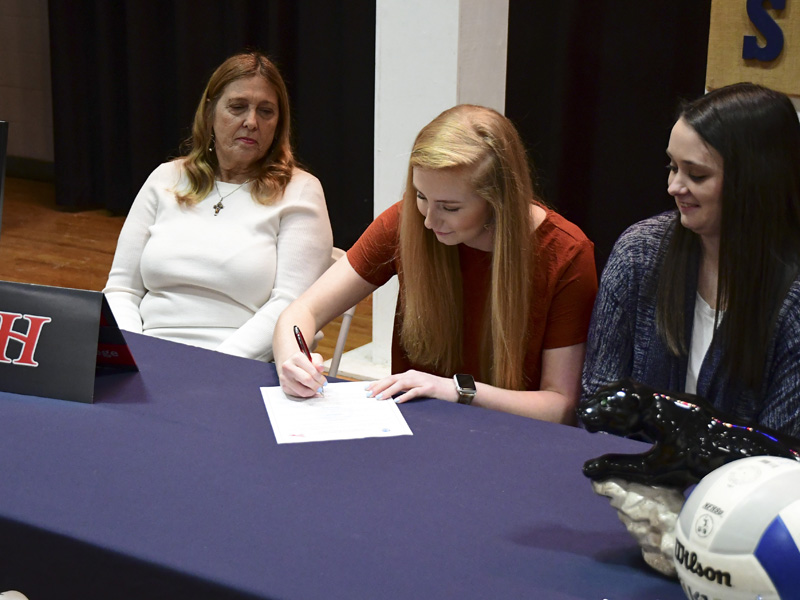 Volleyball Player of the Year Caroline Foote of Jemison signed to play at Huntingdon College in Montgomery during a signing ceremony on Jan. 28.

“I really, really liked it,” Foote said. “It felt like home.”

According to Foote, she became familiar with the school’s coaching staff and program after they had been regularly assisting with summer volleyball camps at JHS since she was in eighth grade.

“I knew they had really great coaches, because they had helped us personally,” Foote said.

Foote has been playing competitive volleyball since second grade, but the path to the college level was not always easily evident.

“I never thought I’d be able to do this, because it was really hard at times,” Foote said. “There were points where I wanted to quit so, so bad, but when you have great coaches that push you, it makes a difference.”

One of those coaches was JoAnn Hollis, who is the director of Alabama Juniors Volleyball Club in Birmingham and attended the ceremony. 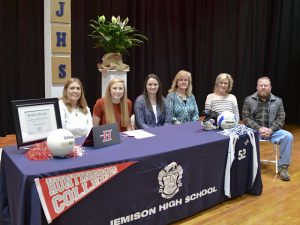 Foote was joined on stage by her family and coaches for the signing ceremony. (Photo by Anthony Richards)

Something that should help Foote’s transition to college life is that her college roommate will be fellow JHS senior Gentry Scott, who is one of her best friends and recently signed to play golf at Huntingdon.

According to Foote, her versatility will come in handy at the college level, as the coaching staff has hinted she will fill positions of need.

“They have some taller girls, so I feel like I’ll be playing more along the back row and serving a little bit,” Foote said.

The increased intensity of college ball is what she is looking forward to experiencing the most.

Foote had opportunities to play against her future teammates in play date scenarios, but she is excited to see how she fares in true game action.

“I feel like a play better when the pace is fast,” Foote said.

Although she saw some interest as a junior, the recruiting process ramped up her senior year.

“I’m glad that it’s over with, and now I can just take a deep breath,” Foote said.