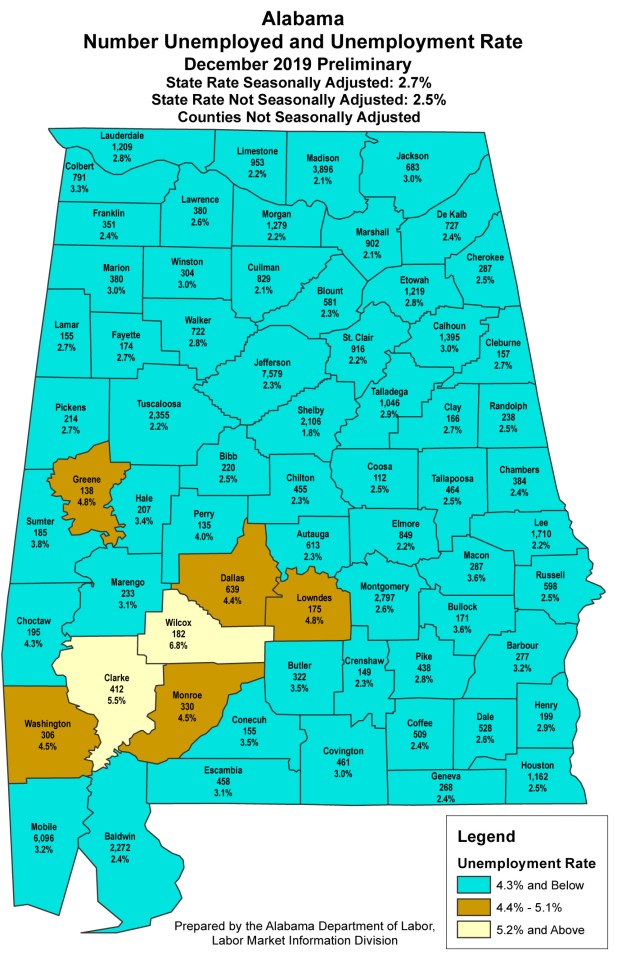 This graphic shows a map of Alabama counties and their unemployment rates for the month of December. (ALABAMA DEPARTMENT OF LABOR)

The unemployment rate for Chilton County during the month of December held at 2.3%, the same mark posted in November.

The Alabama Department of Labor released the statewide statistics Jan. 24.

While the rate did not drop from the previous month, it was almost a full percent lower than the 3.2% mark posted in December 2018.

Chilton County posted a civilian labor force of 20,031 in December, up 15 people from the month prior.

“I’m so proud to be able to close out this decade with record-breaking economic measures,” said Gov. Kay Ivey. “All year long, we’ve had good news to share, and to be able to end the year, and the decade, on such a positive note is wonderful.

“Earlier this year, Alabama had never reported an unemployment rate lower than 3.0%, and now we’ve had one for the last three months! Nearly 84,000 more people have jobs now than last year. I’m excited about the path that Alabama is on, and the positive impacts this news has on our people.”

“For the 11th month in a row, our job growth has met or surpassed the nation’s,” said Alabama Department of Labor Secretary Fitzgerald Washington. “We’ve gained over 46,000 jobs since last December, and we continue to see employers posting job ads.”

Shelby County once again posted the lowest unemployment rate in December with a 1.8%. Wilcox County was once again the highest at 6.8%.

Valentine’s Day is just around the corner and Raleigh’s Place is doing its part in sharing the love by hosting... read more