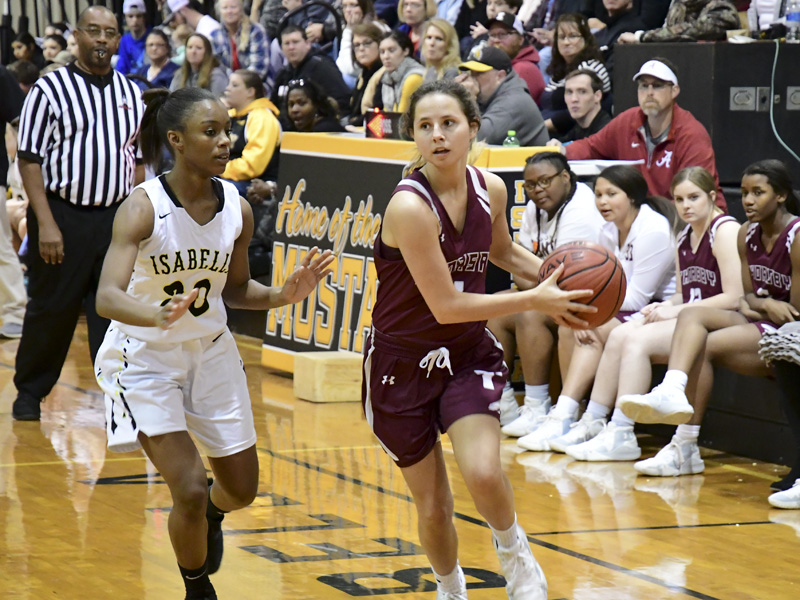 Thorsby’s girls basketball team improved to a record 8-1 against county opponents this season following a 44-33 road victory against Isabella on Jan. 21.

Carlee Wyatt had another sensational scoring night with 25 points to lead all scorers.

Throughout the season, Wyatt has developed into the maestro of the offense by using her scoring ability to draw the attention of the defense and setup her teammates to score.

Another Rebel player who had a good night was Cameron Lockhart who had seven points, all in the second half.

“I had to play on the block a lot tonight, so it was all about boxing out and getting as many rebounds as I could,” Lockhart said.

According to Lockhart, ball handling is the area of her game where she has seen the most improvement from a year ago.

“I’ve gotten stronger with the ball, and am just more confident in myself,” Lockhart said.

Despite the final score, the Mustangs gave the county champs all they could handle and were led by a bevy of talented underclassmen. 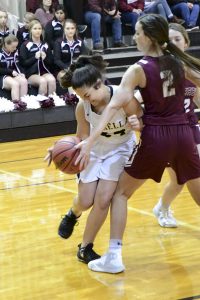 Isabella’s Amelia Fjeldstad is fouled by Thorsby’s Emily Jones. It was a physical game for both teams. (Photo by Anthony Richards)

Isabella only trailed 8-7 at the end of the first quarter and 15-14 at halftime.

The Mustangs actually grabbed a 21-20 lead early in the third quarter after Alexis Higgins buried a 3-pointer from the left wing, which came as a result of IHS chasing down consecutive offensive rebounds to keep the possession alive.

However, Thorsby began to flex its muscle and show why they are the champs with a couple of baskets to counter, including a catch-and-shoot 3-pointer from Wyatt, her third of the night.

“It was a rough game with a lot of fouls,” Lockhart said. “We just had to calm down and figure out how we were going to run our offense.”

Thorsby’s lead grew to 34-25 at the end of the third quarter.

The barrage of long-range bombs continued, this time from Amelia Fjeldstad, as the Mustangs cut the deficit to single-digits, 40-33, with 1:50 remaining.

Higgins and Makayla Logan had good looks for Isabella from beyond the arc in the last minute, but they did not fall.