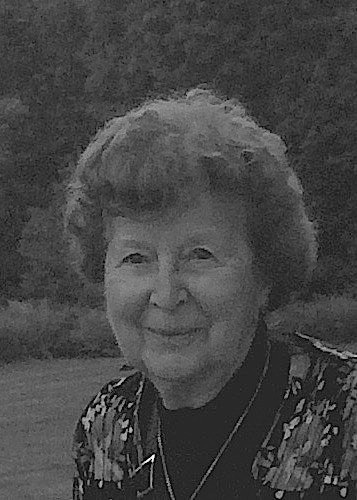 Helen Marie Kindergan Higgins was born in River Edge, New Jersey, on September 15, 1921. The second of two children of Maria Arias Kindergan and Joseph Francis Kindergan who was a bricklayer and contractor.

She grew up in New Jersey and started school at the age of 4 because according to her mother, “She was a smart little thing.” She graduated from Hackensack High School, New Jersey at the age of 16 and entered Skidmore College in Saratoga Springs, New York.

She graduated from college at the age of 20 and entered the work force as a secretary on Wall Street in New York City.

On April 30, 1943, she went on a blind date and met the love of her life, Navy Lt. Milton Higgins, while he was on liberty in New York.

They were married on March 12, 1944 and honeymooned at the historic Chateau Frontenac in Quebec, Canada. Immediately following their honeymoon, Milton was shipped out on the battleship Arkansas and participated in D-Day.

Following the end of the war, they moved to Chicago where Milton earned his MBA/CPA at Northwestern University and Helen worked as a legal secretary.

Following the competition of Milton’s degree, they headed west in the first car either had ever owned with all their worldly possessions in the back seat.

They arrived in southern California and eventually settled in Downey, where they lived for 65 years and raised their three children: Sharron, Linda, and Keith.

When the children were young, Helen was a stay- at-home mom. When the youngest child entered school full time, Helen returned to college earning and earned her teaching credential and master’s degree. She taught business education at John Glenn High School for 29 years.

In retirement, Helen and Milton, married for 71 wonderful years, traveled throughout the world and managed to visit exotic places on every continent.

She was always impeccably dressed, the epitome of social graces, and a gracious hostess. Her planning and organizational skills were legendary! She was able to organize any event or activity, even if it was only cleaning out a closet.

On December 26, 2019, with family gathered around, she joined Milton who passed December 27, 2015. She is survived by her three children, seven grandchildren, and eight great grandchildren who will miss her very much.

We wish to thank and recognize the loving, professional care provided for her by the staff of Palomino Residential Care Home as well as the support and comfort from Premium Hospice.