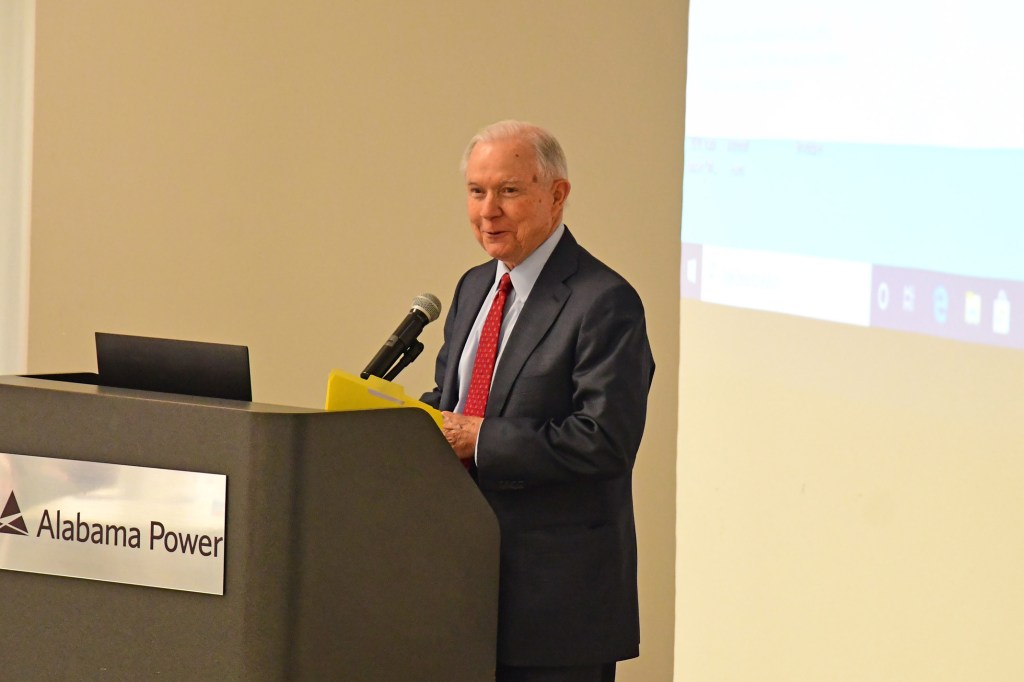 Former U.S. Attorney General and Senator Jeff Sessions came to Clanton and attended the Chilton County Chamber of Commerce’s luncheon Jan. 15. Sessions is once again running for the Senate seat that he held for 20 years. (J.R. TIDWELL/ADVERTISER)

After guest speaker Josh Caray finished his presentation, Sessions was invited to the fore to say a few things about himself and his bid to regain his old Senate seat, one which he held from 1997-2017 before becoming U.S. Attorney General under President Donald Trump until Nov. 2018.

“I am running. We have been working hard since announcement day back in November,” Sessions said.

Sessions said he is running in part to back up President Trump.

“I feel like President Trump has done what he promised,” Sessions said. “I think he will be re-elected. I don’t think the Republican Conference, overall, has understood and supported his agenda as much as they should. He brought in many new voters, and they need to be embraced. We need to listen to what they care about.

“The president talked about ending illegal immigration and building a wall. We have not completed that yet. He did deliver on canceling NAFTA, and we have a new and better agreement. I’d like to help him complete his promises that the American people voted for. We want to keep our good judges he has appointed, fabulous judges. As Attorney General, we helped out with that. I have been so pleased with that.”

Sessions said there will be a “window of opportunity” to get some things done if President Trump is once again elected.

“He will be a second-term president, and they usually have a lot of momentum for a year or two,” Sessions said. “We will need to get this done now, and I feel like I can hit the ground running.”

Sessions also said he plans on keeping Alabama’s interests at heart if he is re-elected to his former position.

“Alabama, our military and our highways and our education, we need a senator who understands them and protects our share of those projects,” Sessions said. “We need to make sure we protect Alabama’s interests in a whole host of areas, the biggest probably defense.

Sessions said he also supports President Trump in being cautious about sending troops to the Middle East, saying the United States needs a long-term plan in place before any more troops are sent in the future.

“As a member of the Senate, and having been there for 20 years, I am going to be an advocate for more realism in foreign policy,” Sessions said.

There are several prominent members of the Republican field running for the U.S. seat currently held by Sen. Doug Jones.

Other than Sessions, these include Bradley Byrne and Tommy Tuberville, both of whom also visited Chilton County over the past few days.