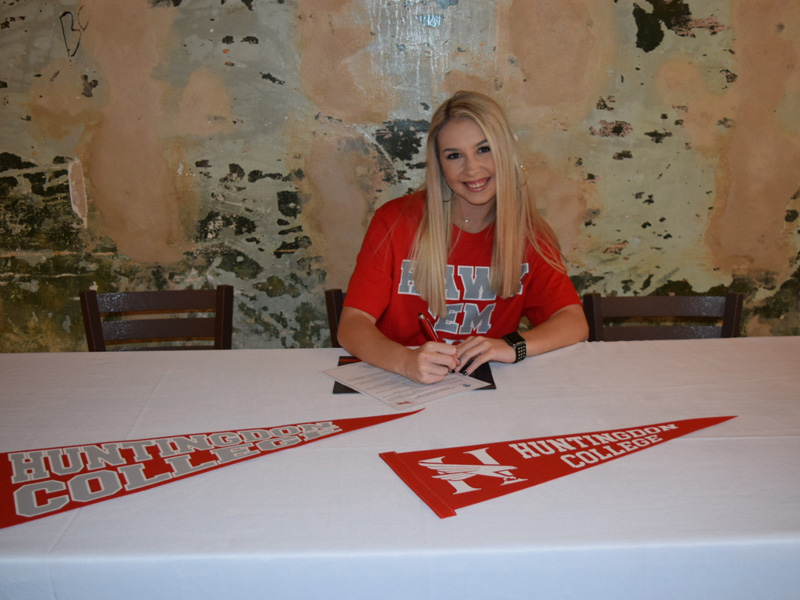 Jemison senior Gentry Scott has been groomed to play golf from a young age and now will get the chance to play at the next level after signing to play golf at Huntingdon College in Montgomery.

Scott visited the campus over the summer and talked to the golf coach while she was there. From that experience, she knew right away that Huntingdon was the place for her.

“I didn’t want to be far from home,” Scott said.

During the recruiting process she also toured Wallace-Hanceville, but at the end of the day she wanted to go to a four-year college.

“My best friend is going there [Huntingdon], so we’ll get to be roommates as well,” Scott said.

According to Scott, she really started caring about golf in seventh grade, which is when she also started playing at the high school level.

However, since then she has enjoyed playing outside of school ball more.

Golf does not have the same interest as other sports in the county, which has required Scott to do a lot of her own practice and learning throughout the years.

Because of this, one of the things she is looking forward to most is the chance to be around people that are just as passionate about golf as she is.

“When I get to college, it will be the first time that I’ve ever gone to golf practice [as a team],” Scott said. “It’s going to be different but a lot of fun.”

Helping along the way has been a support staff that includes her parents and swing coach Scott Hassee.

Hassee has been Scott’s swing coach for the past two years and is the lead instructor at Hank Johnson School of Golf at Timberline Golf Club in Calera, which is also her home course.

“My dad played [golf], so whenever I was young I would go and hit [balls] with him,” Scott said. “I probably first picked up a club when I was 10. It’s been a while.”

Despite her skill level, playing in college was always something that she considered a possibility but not an expectation.

“I’ve always gone back and forth of whether I wanted to play college golf or not,” Scott said.

Once the offers from colleges started coming in, she realized that there was a genuine opportunity there.

“I started getting offers my junior year, and it was really exciting,” Scott said.

Scott’s offers were from schools throughout the country, such as in states like Wisconsin and New York.

“It was just cool that they even knew about me,” Scott said.

She is relieved that the process of choosing a college is over.

“Committing has helped me a lot, because I worry about everything,” Scott chuckled. “Not having that pressure helps.”