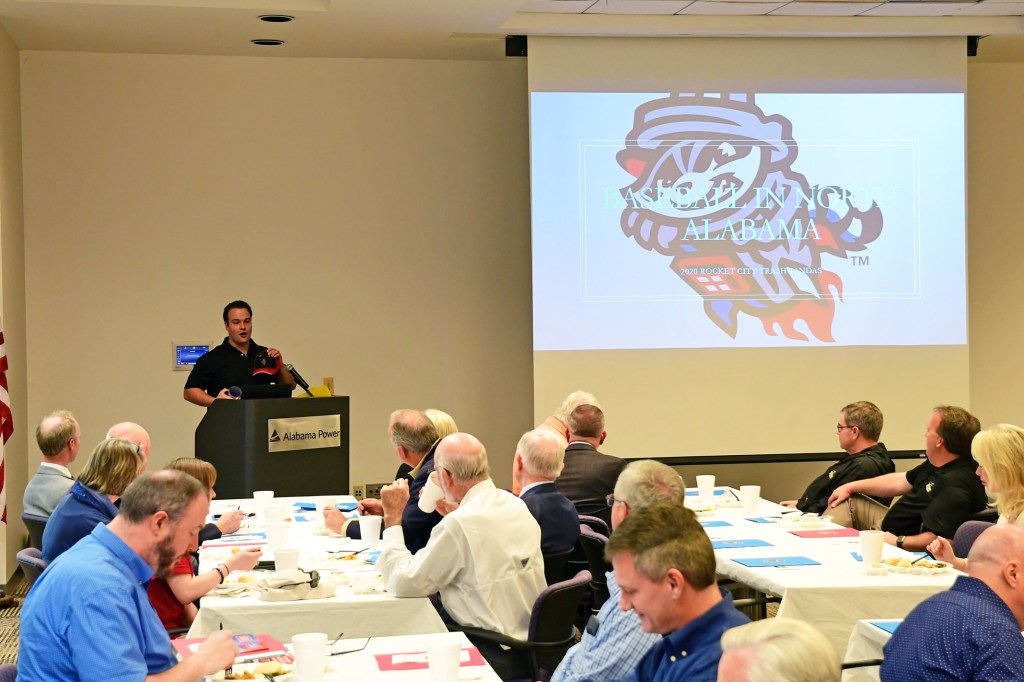 Sports broadcaster Josh Caray, the son of Skip Caray and grandson of Harry Caray, was the guest speaker at the January Chamber of Commerce luncheon. (J.R. TIDWELL/ADVERTISER)

The Chilton County Chamber of Commerce held its first business luncheon of the new year Jan. 15 at the Alabama Power conference building in Clanton.

The guest speaker was veteran sports broadcaster Josh Caray, the Director of Broadcasting and Baseball Information for the Rocket City Trash Pandas, the new name of a Minor League Double-A team relocating from Mobile to Huntsville. The team was formerly known as the BayBears.

Josh is the son of Skip Caray, who spent several years as a sports broadcaster for the Atlanta Braves, as well as the grandson of legendary Chicago Cubs voice Harry Caray.

His brother Chip also works in the industry.

Josh Caray spoke to the crowd about the ins and outs of Minor League baseball. He said that the final score of the games is not that important, as the minors are more of a development league and launching pad for future Major League talent than a place where wins and losses matter.

He said Minor League teams do not take themselves too seriously, hence names like the Trash Pandas (a nickname for a raccoon).

That name was actually suggested and chosen in an open vote by baseball fans. The Trash Pandas moniker beat out other finalists ThunderSharks and Moon Possums.

“If you leave the game not knowing what the final score was, we have done our job,” he said.

Josh Caray likened the new baseball team to the new Alabama Farm Center to be built in Clanton in terms of working to draw a crowd from both locals and tourists.

The new venue for Rocket City, much like the new farm center, will work to bring people and events in and make sure everyone has a good time during their visit.

Former senator and U.S. attorney general Jeff Sessions was also in attendance for the event. He announced in November of last year that he intends to seek re-election for his old Senate seat currently held by Sen. Doug Jones.

The Chamber of Commerce holds these luncheons once a month during much of the year in order to give members a chance to network.