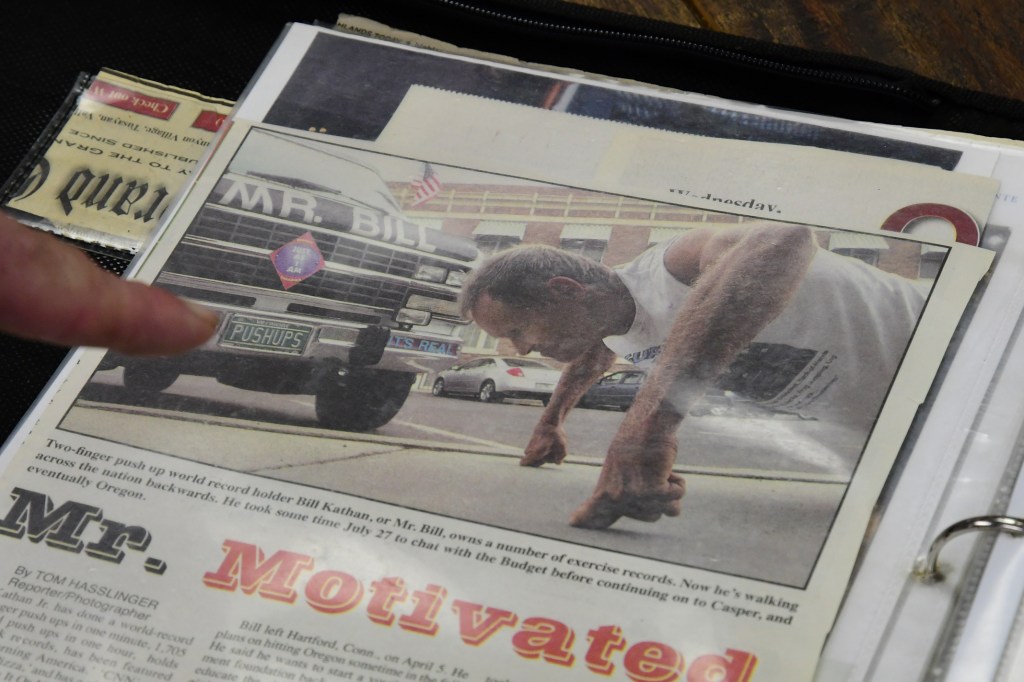 Bill Kathan says he has broken over 100 world records in a 20-year span, with many dealing with exercise. He is seen here doing two-finger push ups. (CONTRIBUTED)

Bill Kathan has gone through many nicknames over the years, from “Wild” Bill to “Super Bill.”

Now, he goes by “Real” Bill, and what Real Bill is good at is breaking world records, especially those involving exercises like push ups, jumping jacks or even skipping.

“I am the world exercise champion,” Kathan said.

He said that claim was self-purported at first, but now he has broken enough world records to feel like he has earned the moniker.

“What makes anybody anything of what they claim to be?” he said. “You have to be well-known, and break lots of records for instance. I said I have to make a name for myself. I saw a guy doing jumping jacks on “Good Morning America”, and that got me started. I broke his record. Then I broke a lot more to go with that.”

Kathan says he has broken over 100 records that either he already owned and simply surpassed or those of others he has seen on the internet, television or in the Guinness Book of World Records.

Kathan has appeared in “Ripley’s Believe it or Not” for doing things like backhand push ups and push ups on top of raw eggs without breaking them, setting a world record during the latter performance.

“They gave me white eggs right out of the cooler that break easier, but I still did it,” Kathan said.

He said he has also been featured in many newspapers as well as ESPN and the Discovery Channel.

He was on ESPN once and set a world record for doing 58 two-finger push ups, which uses only one finger on each hand, in one minute.

He also once held the record for the fastest time to eat a whole raw Spanish onion.

Given his number of feats, Kathan says he also holds the record for breaking the most records in different categories.

Kathan, 67, is originally from Vermont but now calls Chilton County neighbor Perry County home. He moved to be closer to family.

He attends the Clanton Seventh-day Adventist Church where he works with the children.

He says he likes to work with kids doing things like teaching them ways to stay healthy and fit.

“They love my demonstrations,” Kathan said.

Kathan said he is still working on beating more records or topping his own.