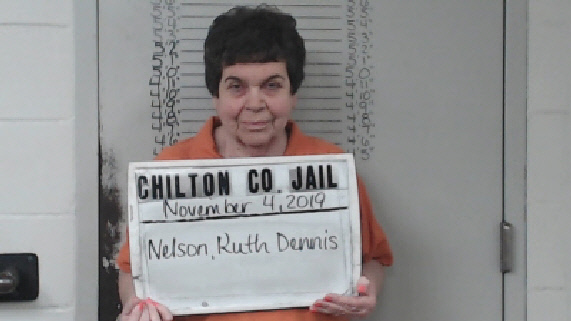 Ruth Nelson has been sentenced to six months in jail to be followed by 18 months of probation for theft. (CCSO)

The former bookkeeper of Pleasant Grove Baptist Church in Jemison is behind bars for embezzlement.

According to 19th Judicial Circuit Chief Assistant District Attorney C.J. Robinson, Ruth Dennis Nelson, 72, was sentenced on Nov. 4 to 24 months in jail, though the sentence was split to six months in jail and the rest to be served as probation.

She took the money mostly through electronic transfers by doing things like paying personal bills with the church account.

“She took some here and there,” Robinson said. “She showed typical behavior for people involved in cases like this. She had access to the account, so she had the means and opportunity to put her hand in the money bag.”

The church discovered the theft after Nelson had a stroke and tasked someone else with keeping its books.

Robinson said Nelson will be in the Chilton County Jail until around May when she will be released on probation.

“Upon her release, she has been ordered to pay $200 a month to the church in restitution,” he said. “If she manages to pay off the debt before she dies, she will then have to pay $10,000 to the church’s insurance company based on a fraud file.”

Robinson said some members of the church attended Nelson’s hearings, but none of them spoke against her or in her defense.

By J.R. TIDWELL / Editor The Jemison City Council unanimously approved an adjustment to the base pay scale for members... read more