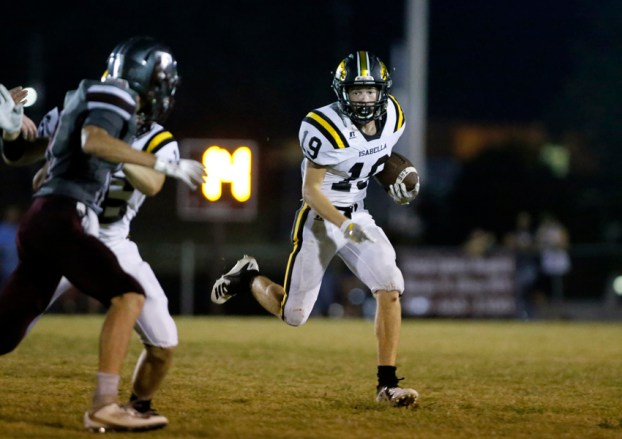 Kendall Reeves had a knack for making big plays for the Isabella defense throughout the year, and he is The Clanton Advertiser’s 2019 Football Defensive Player of the Year as a result.

Reeves had played cornerback in past years for the Mustangs, but he took his play to the next level during the 2019 campaign.

“We put him up against their [opponent’s] best receiver,” Isabella head coach Tate Leonard said. “As the year went on, he gained confidence to the point where he wanted people to throw his way.”

Reeves traced the success back to the work he put in during the offseason.

“I had a lot more experience from the year before going in,” Reeves said. “I learned a lot from our seven-on-seven [drills] we did.”

Technique was also where a majority of his focus went.

“I changed my footwork just a little bit,” Reeves said. “I used to watch the quarterback, but I started watching the receiver after I learned my lesson a couple of times.”

Reeves led Class 1A with nine interceptions on the season.

Taking shots deep against Reeves proved to be a high–risk maneuver for opponents, and his ability of finding the ball and making a play on it in the air was more like an art form than a football play.

On several occasions Reeves’s tight coverage made him look like the attended receiver on the play.

“I told him over the summer, that I didn’t want to be the opposing team’s quarterback, because I knew our secondary was so good,” IHS quarterback Cole Atchison said.

Reeves also played receiver on offense, which required a different approach both physically and mentally.

“One’s about staying with the man (cornerback) and the other is about trying to get rid of the man (wide receiver),” Reeves said.

According to Reeves, playing corner is much more challenging because it is very reactive to what the receiver does, while as a receiver you are the one dictating things.

“You’ve got to just stay in a back pedal and watch his [receiver’s] hips,” Reeves said.

The Isabella secondary benefited throughout the year from a disruptive defensive front seven that produced its share of pressure on opposing quarterbacks.

“It meant a lot,” Reeves said.

Reeves stated the aerial attacks of Millry and Lanett presented the toughest tests on the year.

He started playing football when he was in first grade, but then took a long hiatus until picking it up again during his freshman year of high school.

According to Reeves, Cole Atchison, Brandon Evans and Lance Price convinced him to try out for the team, and he was also intrigued with the introduction of new head coach Tate Leonard.

“I want to thank my coaches and the whole Isabella School for pushing me to where I needed to be,” Reeves said.

Cole Atchison waited his turn to become starting quarterback and is now the 2019 All-Advertiser Football Offensive Player of the... read more