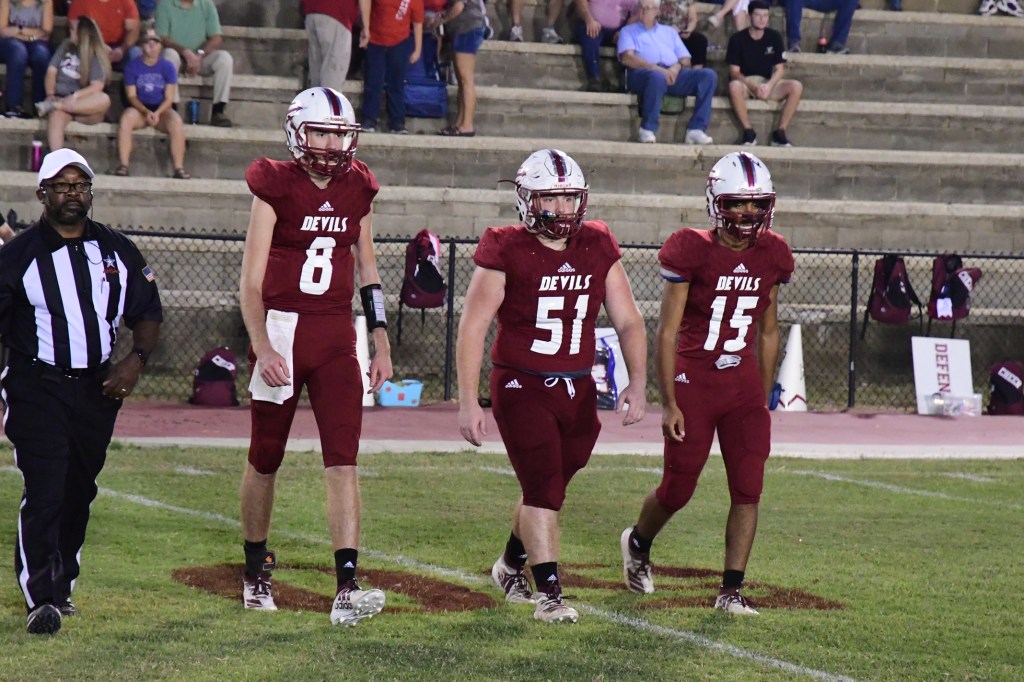 Maplesville’s Noah Walls (51) walks out onto the field for the coin toss as one of the Red Devils’ captains against Reeltown. Walls was named first team all-state by the Alabama Sports Writers Association. Teammate Jackson Abbott (8) was listed as an honorable mention. (FILE)

The 2019 football season may be in the rear view mirror, but the accolades have continued to pour in for a couple of local schools.

The Alabama Sports Writers Association recently released its list of 2019 all-state football players and coaches, and nine local names were included on the list.

Unsurprisingly, the names are divided evenly among representatives from Isabella and Maplesville.

The top honor goes to Isabella head coach Tate Leonard, who was named the 1A Coach of the Year.

Leonard led the Mustangs to their first undefeated regular season since 2002 en route to a 12-1 campaign that ended in the third round of the state playoffs with a loss to eventual Class 1A state champ Lanett.

Isabella also defeated rival Maplesville for the first time since 2003, though the Red Devils still lead the overall series by a wide margin (58-15-5).

The only player in Chilton County to be named to a first-team was senior offensive lineman Noah Walls of Maplesville.

Walls had two teammates named to the second team in Class 1A: senior running back Ryan Morrow and senior offensive lineman Gavin Jones, as well as junior quarterback Jackson Abbott who garnered an honorable mention.

Atchison was recently named The Clanton Advertiser’s offensive player of the year after an outstanding 2019 season.

The Mustangs scored the first touchdown of the overtime period, and Leonard decided to go for two.

“It wasn’t (a hard decision) at all to go for two,” Leonard said after the contest. “My quarterback (Atchison) said he wanted the ball, so I gave it to him.”

Atchison’s conversion proved to be the deciding factor, as the Isabella defense stood tall on a two-point conversion attempt by Millry to win the game.