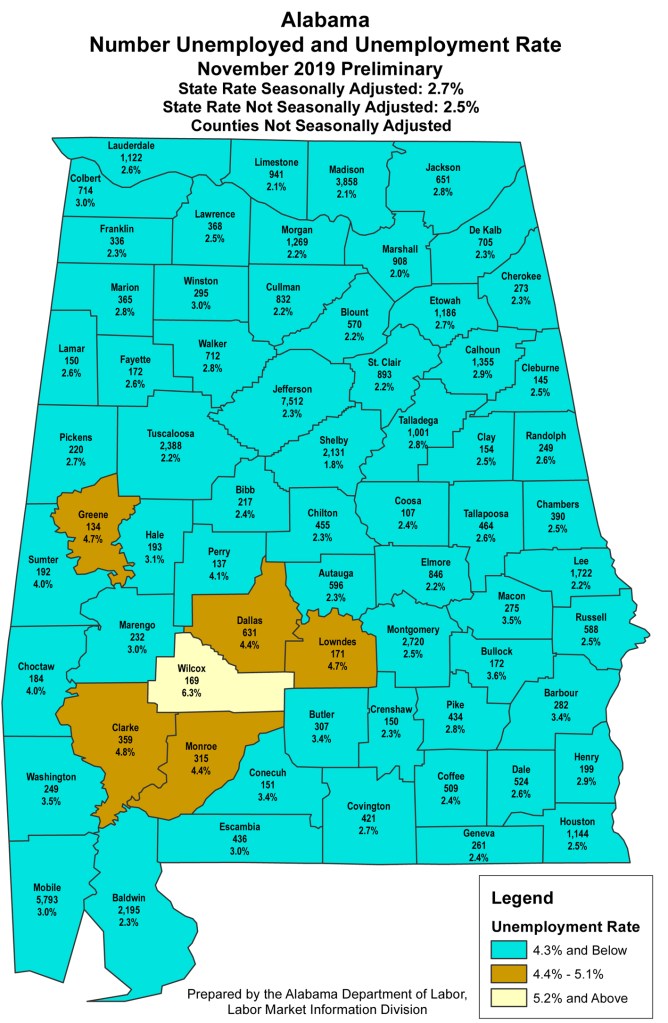 This graphic shows the unemployment rates for each county in Alabama during the month of November. (ALABAMA DEPARTMENT OF LABOR)

The unemployment rate for Chilton County rose 0.1% to 2.3% during the month of November.

However, that rate remains a good bit lower than the 3.1% posted in November of 2018.

The civilian workforce in the county tallied 20,025 during November, according to the Alabama Department of Labor.

Of those, 19,570 were listed as employed and only 455 individuals were labeled as unemployed.

According to Alabama Department of Labor Secretary Fitzgerald Washington, the state of Alabama reached a new record unemployment rate for the seventh month in a row.

“Alabama’s preliminary, seasonally adjusted November unemployment rate is 2.7%, down from October’s previous record rate of 2.8%, and well below November 2018’s rate of 3.8%,” said the Department of Labor in a release.

“For seven months in a row now, we have announced record-breaking jobs numbers in Alabama,” said Gov. Kay Ivey. “We are consistently seeing yearly drops that are the highest in the nation.  Our jobs count continues to break records and beat expectations.  More than 80,000 Alabamians are working today that weren’t last year.

“All this data combines to paint a picture of economic health in Alabama. We have one more month to report on for 2019, but it’s certainly shaping up to be a banner year!”

“The number of jobs our economy is supporting is, yet again, at a record high,” Washington said. “We’ve seen a gain of more than 50,000 jobs since this time last year. Our job growth rate in November is the highest it’s been all year, and we’ve once again surpassed the national job growth rate. Manufacturing employment in Alabama is at its highest level in 11 years. Other sectors are currently experiencing their highest levels of employment in history. Employers are hiring, and people are finding work.”

Shelby County once again posted the lowest unemployment rate at 1.8%, while Wilcox County remained the highest at 6.3%.

There were only six counties in Alabama out of 67 during November that posted 4.4% unemployment rates or higher.

Wages have also increased over the year, according to the release.