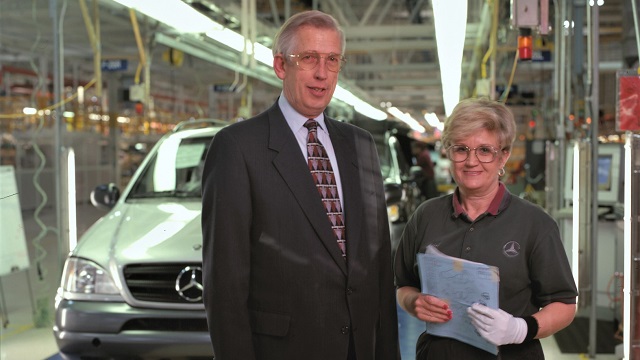 Clanton native Elmer Harris, left, was a champion of economic development at Alabama Power and led in the recruitment of companies like Mercedes-Benz to the state. (ALABAMA NEWSCENTER)

By ALABAMA NEWSCENTER / Special to the Advertiser

Harris joined Alabama Power in 1958 as an engineering co-op student at Auburn University.

Following graduation, he spent 10 years in Alabama Power’s Southern Division in various engineering positions while continuing his education and serving in the U.S. Air Force and Alabama National Guard.

Harris went on to hold positions of increasing responsibility at Alabama Power, Georgia Power and Southern Company before being named president and CEO of Alabama Power in 1990.

He served 12 years as the company’s CEO prior to retiring in 2002 with 44 years of service.

“Elmer Harris was a strong and dynamic leader for our company. And, he possessed a strong interest and commitment to the growth and development of the state of Alabama,” said Tom Fanning, Southern Company CEO.

“Elmer was very engaging and found creative solutions to many regulatory, community and company issues.”

Roger Yeargan, Alabama Power’s hydro manager for the Lower Coosa system, said that Harris once flew in by helicopter to Mitchell Dam to have lunch with the employees there.

“He was well respected — a great leader and a great man,” Yeargan said. “He was always a friend to the company and its employees. He liked to walk around to employees and ask ‘what have you done for Alabama Power today?’ because he wanted to know how they were doing.”

A champion of economic development, Harris played a major role in creating the Economic Development Partnership of Alabama (EDPA) and was integral in bringing companies such as Mercedes-Benz, Honda, Boeing and Hyundai to the state.

In 1989, Harris created the Alabama Power Foundation, the largest corporate foundation in the state. During his tenure, the foundation invested nearly $60 million in projects benefiting Alabama communities. Thirty years later, the foundation continues to partner with nonprofits by providing volunteer, organizational, promotional and financial support.

“Elmer Harris worked at and led Alabama Power during an important period for our company and our state,” said Mark Crosswhite, Alabama Power CEO. “Our customers, and people across the state, continue to benefit from his leadership, which was always guided by a firm commitment to make Alabama a better place.”

Harris remained committed to community involvement even in retirement, serving on various civic and business boards, including the Alabama 4-H Council, Auburn University Foundation, the Boy Scouts of America, the board of trustees for Samford University, Dawson Memorial Baptist Church, AmSouth Bancorporation and Junior Achievement.

Harris served as honorary consul general of Japan and was inducted into the Alabama Engineering Hall Of Fame in 1996 and Alabama Business Hall of Fame in 2007.

He and his wife, Glenda, had two children, eight grandchildren and one great grandchild.