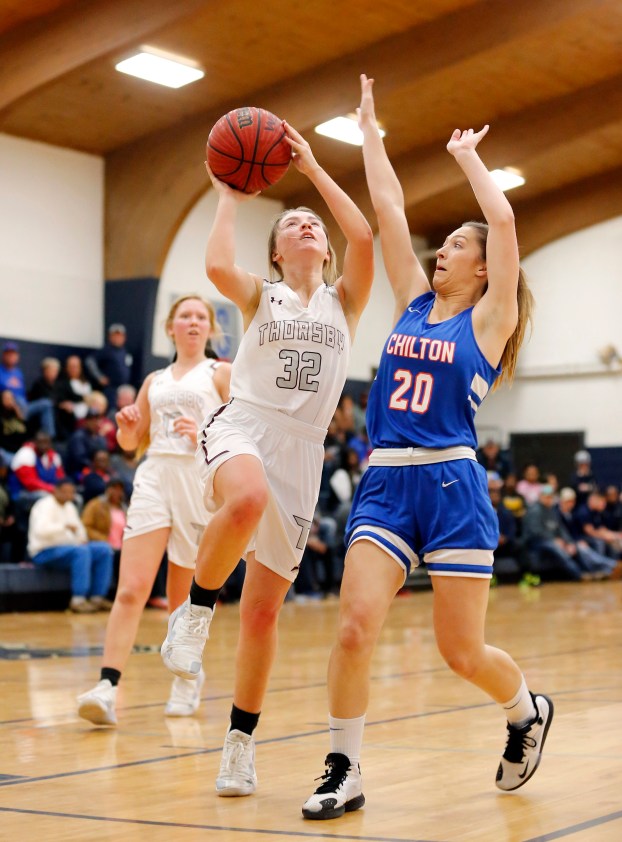 The 2019 County Basketball Tournament turned out to be twice as nice for Thorsby High School as the Rebels took home a pair of tournament titles on Dec. 20.

The Lady Rebels knocked off the Chilton County Tigers 48-46, while the Thorsby varsity boys would defeat the Jemison Panthers 52-41 while both Rebel teams would claim the title of 2019 Chilton County Basketball Tournament champion.

A capacity crowd at Alton Cobb Gymnasium on the campus of Jemison High School would be treated to a pair of fantastic games on Friday evening as the varsity girls matchup would get things going with a back and forth battle from the opening tip.

Chilton would jump on the board early thanks to a pair of baskets from Iasia Anderson but would be quickly answered by a pair of threes from Carlee Wyatt and Lindsey Wood to turn the tide in favor of the Rebels.

Jasmine Martin would flip the lead back in favor of the Tigers by one but a basket from Wood along with another three from Wyatt would make it a four point Thorsby lead.

Martin and Marlie Giles would team up to make it an eleven all game while a three from Kelsey Cleckler would make it a 14-11 Tiger lead. A basket from Paris Dickerson would put Chilton out in from by five but a three from Cameron Lockhart would bring the first period to a close with Thorsby trailing, 16-14.

The two point Chilton lead would remain intact until just shy of the 4:00 mark of the second period when a basket from Wyatt would make it an eighteen all game.

A basket from Martin would put Chilton up by two, while a Thorsby free throw would be met with a basket from Giles to make it a three point game.

Another three from Cleckler along with a basket from Tyonna Booker would give the Tigers their largest lead of the game with under a minute to play in the first half while a basket from Wyatt would send the game to the halftime break with Chilton holding a 27-21 lead.

Wyatt would start the second half with another basket from behind the arc while a free throw from Emily Jones would make it a two point ballgame. A basket from Anderson would put Chilton ahead by four but would be quickly answered by a basket from Wyatt to cut the Thorsby deficit to two.

Martin would again make it a four point ballgame, but a three from Karlee Kincaid to end the period would send the game to the fourth with Chilton holding a 34-33 lead.

Kincaid would keep her hot hand to start the final period as another basket from down town would put the Rebels out in front by two, however, the Thorsby three would be answered by a Chilton three from Anderson to again make it a one point Tiger lead.

A free throw from Kincaid would tie the score at thirty nine while a basket from Cameron Lockhart would give the Rebels a two point lead with 6:04 remaining. A back and forth battle would ensue for the next five minutes before a three from Wyatt with under a minute to play would put the Rebels ahead by three.

Anderson would answer with a pair of free throws but with Thorsby answering with one of their on and Chilton unable to find a last second basket, the Rebels would come away with a 48-46 victory and the title of tournament champion.

“I tried to stay calm and told the girls to go out there and do what you know to do. Take care of the ball and to not throw the ball to them and play like we are suppose too,” said Thorsby Coach Kris Wood. “We missed a couple of free throws and got down and I had to tell them that we are ok and they responded well. During the first half we had two of our starters get in foul trouble and we had to play a few junior high players but they did their part. Then they had a few get in foul trouble and that helped us some. This game could have gone either way, the buzzer just went off and we were ahead. These girls have been playing together for a while, they started out playing varsity while in the 9th grade and they have worked real hard and know each other and it has finally come to fruition. The girls did this, and got this win, I am just there helping them along. I do have to give a big thank you to our principal Mr. Clements, who trusted me enough to let me do this. He comes up and works with the girls to. He is the one responsible for our man to man offense, he has invested his time with these girls and shown how important it is for this program to be a success and it all starts at the top and we couldn’t do it without him.” 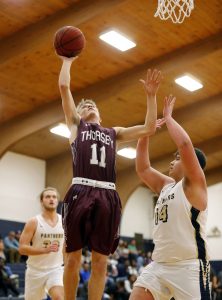 Thorsby’s John Wood drives to the basket for a layup. (BRANDON SUMRALL/SPECIAL)

Varsity boys action would pick up right where the girls left as as both squads would come out exchanging basket for basket. Harrison Hilyer and Koby Davis would give Thorsby an early five point lead, but baskets from James Wright and Jonathan Lowery would cut the Rebel lead to one. A pair from the line from Sawyer Sellers would put Thorsby out in front by three, but would be quickly answered by a basket from Nathan Johns. With forty-one seconds remaining in the period, a basket from Tucker Patterson would give Thorsby a 11-8 lead to end the first.

A free throw by the Panthers to start the period would be answered by consecutive baskets from Sellers to give Thorsby a six point lead but a three and a free throw from Wright along with a basket from Johns would quickly tie the game at twenty. Johns and Wright would continue their scoring trend for Jemison and would put the Panthers ahead by four but would be answered by a pair of baskets from Sellers that would make it a 24 all game at the half.

Davis and Johns would exchange baskets to start the second half while Lowery would later put Jemison ahead by three. The lead would be short lived however as a basket from Patterson along with a three from Wood would flip the lead in favor of Thorsby.

Lowery and Wright would later team up to give Jemison the lead back by two while Johns would make it a three point Panther lead but with just two second remaining in the period, a three from Patterson would send the game to its final period all tied at thirty-five.

The fourth and final period of the contest would turn heavily in favor of the Rebels as a three from Wood would kick start a 9-0 Thorsby run that would eventually end on a basket from Lowery.

With a pair of baskets from Sellers with under two minutes to play, the Rebels would take a ten point 49-39 lead. Johns would ad a basket for Jemison, but three from the line for Davis would send the game to its final score of 52-41 in favor of the Rebels.

“During the first quarter and the first half I felt like we were in control of the game and it felt like we had a 10 or 15 point lead but we were only up four or five and then I would look up and we were behind or tied,” said Thorsby coach Russell Ricks. “The second half I kept telling them that we had to get the ball inside and attack the goal and get to the line. I wanted our guards to try and penetrate if we could. We knocked down a few shots and opened it up a little bit but it was a close game. I thought at times that they were getting the best of us underneath and out rebounding us and no one has done that this year so far. I thought we played hard. My kids never thought that we were going to lose. It was a big win for us to be County Champions two years in a row. A lot of these kids didn’t get to play a lot last year, this is a totally new team, but I am happy for them and happy for the community.”

Sellers led Thorsby with 21 points, 17 rebounds, and 3 blocks while Johns led Jemison with 12 rebounds, 2 steals, and a block.

By J.R. TIDWELL / Editor The state of Alabama has been going all-in while celebrating its bicentennial here in 2019.... read more