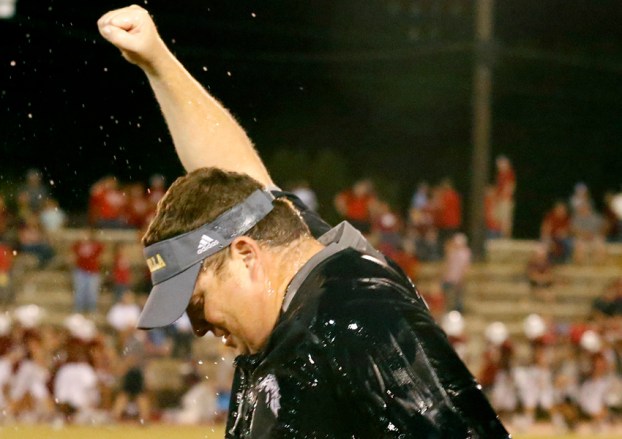 Tate Leonard is doused with water after Isabella defeated Maplesville during the 2019 season. He was named the ALFCA’s Class 1A Head Coach of the Year. (File photo)

Leonard named 1A Coach of the Year

Isabella’s Tate Leonard was recently named the 2019 Class 1A Head Coach of the Year by the Alabama Football Coaches Association.

“It has my name on it, but it has Isabella High School’s name on it as well,” Leonard said. “That’s the most important thing.”

The award comes as no surprise after the Mustangs finished 12-1 and reached the third round of the state playoffs.

“It just shows all the hard work that our players and coaches have put in,” Leonard said. “It says a lot about our program.”

It marks the second time in Leonard’s coaching career that he has been recognized by ALFCA.

He was named Class 1A’s top assistant coach in 2014 while a member of the Maplesville staff.

According to Leonard, he hopes that next year defensive coordinator Jerry Harrison will be given his recognition to complete the trifecta.

Leonard has compiled a record of 39-9, and the Mustangs have made the playoffs each of his four seasons at the helm.