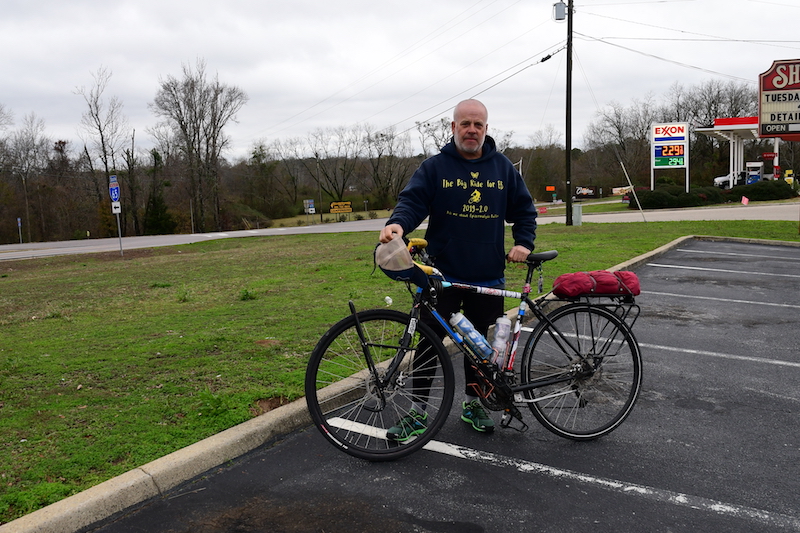 Cyclist Robb Freed of New York in Clanton on his way to Florida. (JOYANNA LOVE/ ADVERTISER)

Cyclist Robb Freed of New York came through Clanton Dec. 17 as a part of his second trip across the country and back again to raise awareness for Epidermolysis Bullosa.

During his ride, Freed is chronicling the journey on his Facebook page and raising money to support those with EB and research to find treatments and a cure through his website.

Freed is calling his project “The Big Ride for EB.”

Epidermolysis Bullosa, often shortened to EB, is a genetic disorder in which the skin is extremely fragile causing it to blister from even slight friction.

Freed’s journey began on April 24, and he has about a month to go. He started in Virginia and biked to Seattle then headed back east and plans to end in Florida.

He said he felt like he had been riding on Highway 31 for about a month before he made it to Clanton.

“My son had this disorder (and) he passed away about 11 years ago,” Freed said. “After he passed away for more than a few years, my life became a downward spiral … Eventually, I got on a bicycle and that all kind of changed.”

When Freed’s son Drake was born, the nurse noticed sores on his hands and ears. About two weeks later, a dermatologist diagnosed him with EB. Treatments are creams and whatever parents have found give some comfort to their children. What works for one patient may not work well for another one.

Parents of children with this disease have found ways to network and share tips.

Research is still working on better treatment options and a cure, Freed said. The process to find a treatment and then get it approved takes years.

Cycling became Freed’s therapy and his obsession. A coworker encouraged him to do a cross-country ride and back. Freed said this gives him more chances to raise awareness.

During his first ride, a fellow cyclist warned him of how hard it would be to adjust to “normal life” after living just day-to-day focusing on cycling and immediate needs. He said his first day back he hit a “brick wall,” feeling sort of caged in, and eventually, he decided he wanted to do the trip again.

“The whole winter, I was just depressed,” Freed said. “All I wanted to do was go ride and see the country.”

While he anticipates having a hard time after this ride also, he has already decided this is his final time doing this.

Freed does not put a lot of planning into his training for the cross-country trips.

“I just ride, and I know what my body will need to be able to do it,” Freed said.

He usually only plans out two to three days in advance. He has stayed in churches and fire stations that have a history of providing a place for cyclists doing similar rides. Some hotels have also given him a place to stay as support.

He said this year he really wanted to build on the success of his first trip and continue to raise awareness and support for EB families.
Freed said he changed the route a little this year, including more time on the TransAmerica trail, so he can see some new places.

Money raised through the ride will go to benefit the Dystrophic Epidermolysis Bullosa Research Association of America (debra.org) that provides services and support for families and parents of those who have EB. He has raised about $35,000 so far.

Freed said he always sets his goal for fundraising for his double cross country rides at $1 million. Even though he knows the odds of reaching such a high number are very unlikely, he said it keeps a goal in front of him.

More information is available at thebigrideforeb.com.