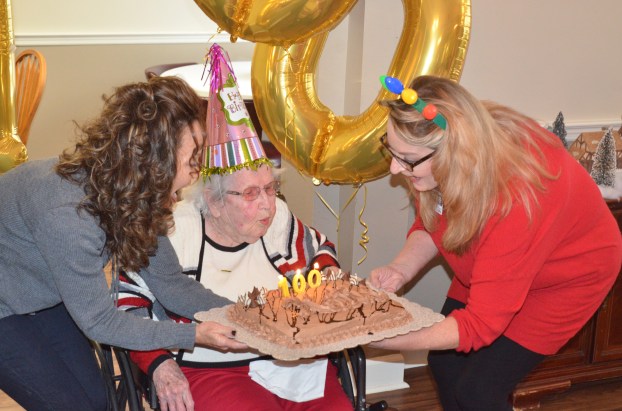 The state of Alabama has been going all-in while celebrating its bicentennial here in 2019.

Katie Adams, a resident at the Gardens of Clanton, has seen exactly half of that.

Gardens staff welcomed Adams’s family to the facility Dec. 20 and held a 100th birthday celebration for her. Her actual birthday is on Dec. 22.

She said her actual name is Mary Adams. Katie is a nickname she picked up in high school back in Chattahoochee, Florida, where she is originally from.

Adams grew up during the Great Depression of the 1930s.

“I grew up on black-eyed peas and lima beans,” she said. “That’s about all we had to eat back then. We were poor back then, but we didn’t know it because everyone was like us.”

While folks in her hometown may not have had much during those times, Adams said they did have good families.

“Daddy was a very devout Christian,” she said. “He had a good sense of humor. One of his sayings I can remember very vividly. He said ‘everything looks different to a man up a tree.’”

Adams also said that Chattahoochee is the home of the Florida State Hospital for the Insane (a moniker that has since been shortened.)

That is where she found herself when the United States entered World War II.

“One thing I remember, we had a big nursing school at the hospital,” she said. “There were lots of girls. There was an Air Force base on one side (in the next town over) and one on the other side. They all flocked to Chattahoochee because there were plenty of girls there to date.”

Adams worked as a bookkeeper at the hospital and one other business before eventually going to school for a year in Knoxville, Tennessee, to come back home and work as an X-ray technician.

“Sometime in the early ’50s I met my husband, and I didn’t work anymore after that,” she said.

The Civil Rights Movement ran through the ’50 and ’60s when segregation was a “big thing,” according to Adams. However, she said folks were treated equally by her and her family.

“We respected the black folks in my hometown,” she said. “The ones older than us we called aunt and uncle. I can remember my mother had an older black woman who would come to help her, and we called her Aunt Marion. We were taught not to mistreat anybody.”

Adams said she remembers seeing the iconic shot of John Kennedy Jr. saluting his father during the funeral procession after JFK’s assassination in 1963.

Adams also recalls how she found out about what was going on during the World Trade Center attack on Sept. 11, 2001.

“My next door neighbor called me and said turn on the television,” Adams said. “She said ‘they have bombed the tower,’ and while we were talking the second tower got hit.”

Adams said she and her husband had one daughter, and among the guests at her party at the Gardens was her first great-grandson Gabriel, named after his great-great grandfather, who she said is the “joy” in her life.

“(The elder) Gabriel was a stonemason who came over from Wales,” Adams said. “He helped build a bunch of churches n Kansas. I still have a mallet of his that I use as a doorstop. I wouldn’t take $200 for it.”

As for her longevity, Adams said she had good genes. Her mother lived to 96, and she has a cousin that lived to 103.