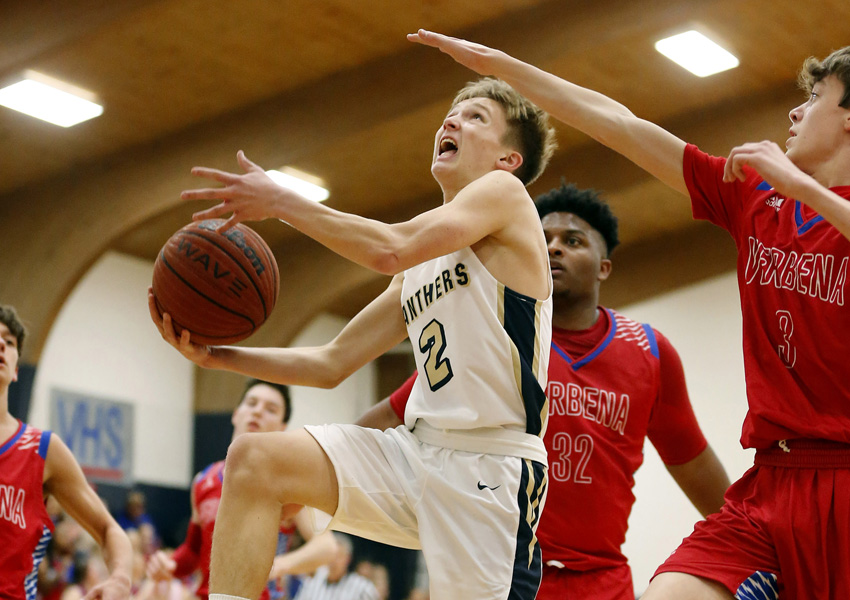 Jemison’s Harrison Hilyer drives to the basket during the Panthers’ opening round win against Verbena on Dec. 17. (Photo by Brandon Sumrall/Special)

Jemison boys basketball matched up against Verbena for the third time this year and won the season series following a 58-44 first round victory in the county tournament on Dec. 17.

“Last year was a new thing to me as a freshman starting, but ever since this year started I’ve been used to it,” Jemison point guard Harrison Hilyer said. “I’ve seen a bunch of growth from everybody, especially those returning.”

Despite the convincing end result, it was an even battle between the two teams for much of the game.

The Red Devils jumped out to a 15-8 lead at the end of the first quarter, but Jemison went on a run of its own and cut the deficit to two points heading into halftime.

A 3-pointer by Daniel Martin early in the third quarter put the Panthers out in front, 33-30. He had seven points on the night. 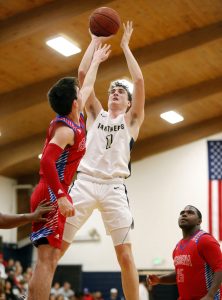 Nathan Johns of Jemison shoots with a hand in his face. (Photo by Brandon Sumrall/Special)

However, Jonathan Lowery fouled out at the tail end of the third quarter. He left the game with 10 points and had provided Jemison with a serious presence around the basket.

Verbena clung to a 34-33 lead heading into the fourth quarter, but it did not last long, as Jemison outscored the Red Devils 25-10 in the final eight minutes.

Nathan Johns, Hilyer and James Wright were each major contributors during the run that punctuated Jemison’s victory.

“We started off a little slow, and it took a hot minute to get the ball rolling,” Hilyer said. “Once we found our rhythm, it seemed like we started to run away with it.”

Johns and Hilyer each scored double figures on the night with 19 and 10 points respectively. Johns’s mark was a game high.

Xavier Dejarnett and Austin Scott teamed up to lead Verbena with 16 points apiece.