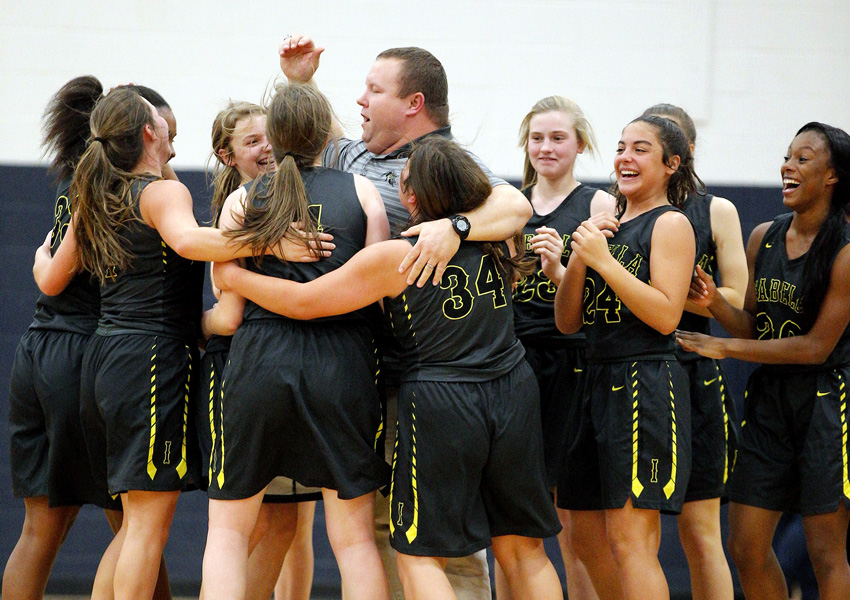 Isabella players surround head coach Jared Day for a team hug on the court after the first round win on Dec. 17. (Photo by Brandon Sumrall/Special)

Isabella girls basketball came back to defeat Verbena 38-36 in the first round of the county tournament on Dec. 17.

Trailing by one in the waning moments of the game, Anna Farris drilled the game-winning 3-pointer from the left wing with eight seconds remaining in the contest.

Farris proved that she had ice water in her veins on more than one occasion with 10 of her team-high 13 points coming in the fourth quarter.

“She can shoot it,” Day said. “The more she makes, the more confidence she gets.”

Verbena’s Jasmyn White rushed the ball up court and had a close look at the basket, but her shot rimmed out as the buzzer sounded, and Mustang players converged upon head coach Jared Day for a team hug near half court.

The Red Devils led 23-13 at halftime, but Isabella stormed back with a productive third quarter. Mercedes Simon of Isabella scored six of her 10 points during the quarter. 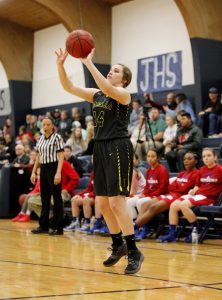 Isabella’s Anna Farris scored 10 of her team-high 13 points in the fourth quarter, including the game-winning 3-pointer. (Photo by Brandon Sumrall/Special)

“The older girls were playing a little flat, so I challenged them at halftime to come out and play a little harder,” Day said. “They definitely responded and battled back.”

Despite the loss, White led all scorers with 14 points. Natalie Easterling added seven points to help the Red Devils’ cause.

According to Day, defense will be the key to the Mustangs’ success this season, and that came into play against Verbena.

This is a change in style from Isabella teams of recent years, which looked to push the pace and were not afraid to get in a shootout.

“We’re not going to be a team that scores a lot of points, so we’ve really focused a lot on our defense,” Day said. “Obviously, we did a pretty good job of holding their girl [White] in check, and we were just playing man. I want to maintain that defensive effort.”