Manhunt ends with suspect in custody 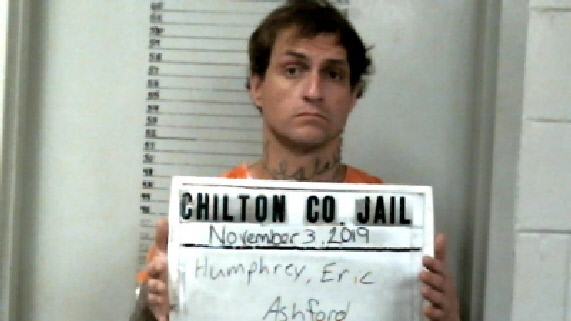 Eric Ashford Humphrey was taken into custody Dec. 16 after a manhunt by multiple police agencies. (CCSO)

A potential kidnapping surrounding an alleged domestic incident in Montgomery led to a police chase and manhunt in Chilton County Dec. 16.

According to Chilton County Sheriff John Shearon, Eric Ashford Humphrey, 33, allegedly brought a woman, possibly against her will, from Montgomery in a vehicle up Interstate 65.

Shearon said the female told Humphrey she needed to use the restroom, so they pulled off the interstate at a location in Calera.

Humphrey’s vehicle was spiked in Chilton County, and afterwards he attempted to flee the scene.

“He ran off into the woods on foot, and we hunted him with dogs and helicopters,” Shearon said.

Shearon said Humphrey managed to elude police for a time, though they knew his general whereabouts.

He said Lt. Lee Faulkner spotted the suspect peeking over a rise.

Officers then re-convened before eventually bringing Humphrey into custody.

“We took him into custody just behind Price Ceiling on 145 just passed Jeff State,” Shearon said.

The female was not in the car with Humphrey on the attempted return trip. She remained at the location in Calera aided by authorities.

“It was a multi-agency effort,” he said. “We appreciate everyone’s help.”

Humphrey was apprehended in the late afternoon and, according to online records, was booked into the Chilton County Jail at 5:10 p.m.

His charge is listed as theft of property in the fourth degree, but that is a prior charge.

Humphrey may have an additional kidnapping charge added depending on court proceedings, along with traffic violations like attempting to elude and others that accompany any police chase.

He was released shortly after booking and returned to Calera to be confined for crimes there.

On a related note, Landon Lee Gunter, one of two recent escapees from the Chilton County Jail, was captured and returned to the facility a little over a week ago.

The inmates broke a metal stool of their cell wall and used it to destroy the wall around a window before hopping the fence to their escape.

Shearon said all of these stools have been removed from jail cells, and further precautions are being taken to make sure no one else repeats the feat.

Shearon said Edwards remains in Florida at this time, where he is being held for charges there.

“We appreciate all the agencies that have helped us with that case,” Shearon said.