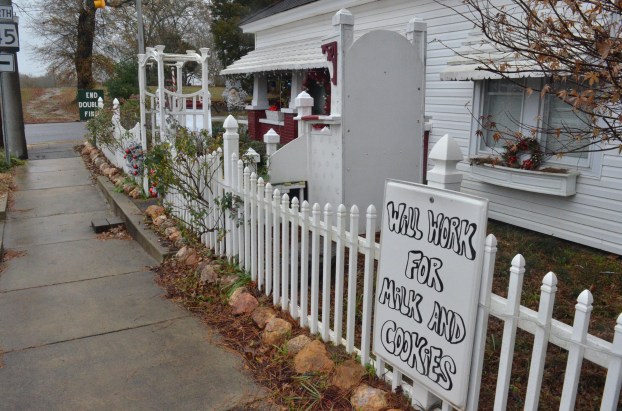 The outside of Terry Crim’s house is filled with Christmas-themed decorations and signs. (J.R. TIDWELL/ADVERTISER)

It has been a few years since Terry Crim, 72, has donned his Santa Claus outfit.

The Clanton man has built up a bit of a following over the years as he portrays Mr. Claus while sitting on the sidewalk waving at passersby on Christmas Eve. 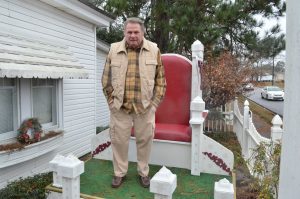 Terry Crim of Clanton has decided to once again decorate his house and dress up as Santa Claus on Christmas Eve this year. (J.R. TIDWELL/ADVERTISER)

While he cannot pinpoint exactly how long ago it has been since he held the event, one thing he is sure of is how the whole thing got started.

“It’s been years ago I guess — I can’t remember when I started,” he said. “My daughter-in-law was in Florida on vacation. She got a Santa Claus suit and brought it for me. My wife asked me, ‘what are you going to do with that?’ I said, ‘I’m going to wear it.’ She said ‘when are you going to wear it?’ I said, ‘Christmas Eve.’ So, I put it on and just got out here on the corner and started waving at people. They started stopping, and word got around. People started bringing their kids.”

Crim said he and his wife, who got in on the act as Mrs. Claus, decided to dress up and wave at those passing on the street because they simply did not have anything else going on at Christmas Eve.

That has been somewhere in the neighborhood of 15-20 years ago now. Crim said memories of his grandfather dressing up as Santa Claus when he was younger may have played a part in his decision to begin donning the suit himself.

“It’s a tradition we got started,” Crim said. “Every year, we would put out Christmas decorations, and we would add a little bit more every year. It just kept getting bigger and bigger.

“I’ve had people come and take pictures. They come back every year and bring their children. Now, some of them bring their grandchildren. One lady, I never will forget, she was so excited that I was out there. She went home and brought me back a cake she had made. People seem to enjoy it.”

Crim said he will don his Santa Claus outfit and take his spot on the sidewalk beside his highly-decorated home around 4 p.m. on Christmas Eve.

“I stay until the people quit coming,” he said. “I imagine I see a couple hundred people each year (between cars and visitors.)”

Crim said he has candy for the kids who come to visit that would like some, and most folks who come up like to get a picture made.

“I listen to (the kids) and ask what they want,” he said. “They tell me, from the bitty ones on up.”

Crim’s house is hard to miss once you pass it. It sits at the intersection of First Street and Third Avenue N beside the Alfa Insurance building and just down from the Clanton Community Center.

If potential visitors are still in doubt, it will be the white house covered in Christmas decorations.

Crim said he likes to decorate his house, both inside and out, which gets him in the Christmas spirit.

There are many decorations, including wooden reindeer, a sleigh, a big chair to sit in for photos, a near life-size nutcracker, candy canes and even a small Ferris wheel and merry go-round full of stuffed animals.

“This year it took me longer (to put up all the decorations) because I had to get stuff out of storage, clean it up and paint it,” Crim said. “I started working on it in September. It took us about a month to decorate the outside. I have to hire people to move the heavy stuff like the sleigh and the chair. I can’t do what I used to do.”

Crim said it makes him “feel good” to interact with people on Christmas Eve as Santa Claus.

Crim took a few years off from the event, but he said this year it “got in his mind” to pick it back up once more.

“It makes me feel like I’ve done something for people at Christmastime,” he said. “I get a lot of feedback that people like it. They are really excited that I started decorating again this year.”