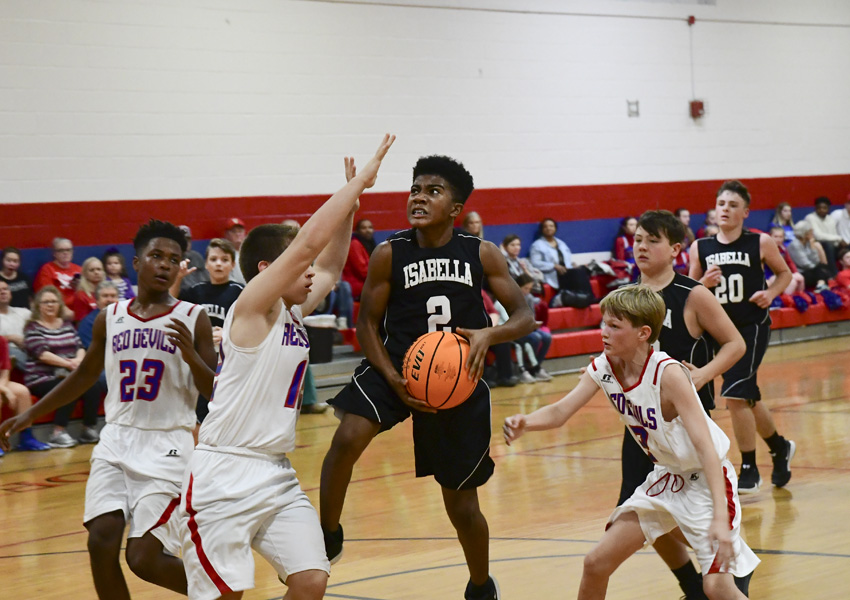 Isabella’s Isaiah Tillis absorbs contact in the lane against Verbena on Dec. 9. (Photo by Anthony Richards)

Isabella picked up a pair of junior high basketball wins on the road against in-county foe Verbena on Dec. 9.

Both the varsity boys and girls games between the schools were cancelled for the night, which meant that the junior high teams took center stage.

Isabella jumped out to the lead and controlled both contests, although Verbena made a run late in the boys game.

Colton Conway led the IHS boys with 14 points, six of which came in the fourth quarter as the Mustangs squandered any thought the Red Devils had of a possible comeback bid.

Falcon Fowler and Garrett Price each finished with six points for the Mustangs, while Austin Porter added five points including Isabella’s only make from beyond the arc. 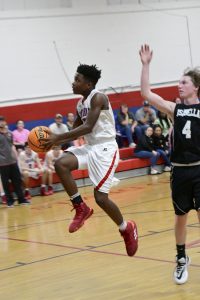 Donald Jackson of Verbena drives to the basket on a breakaway. (Photo by Anthony Richards)

Despite the losing effort, Verbena eighth grader Donald Jackson led all scorers with 16 points on the night.

All game long Jackson was very active around the ball and it resulted in opportunities around the rim and with the ball in his hands.

However, it was even harder sledding for the Verbena offense in the girls contest.

Jamyriaua Lykes was the leading scorer for the Red Devils with four points, as opposed to four different IHS players who eclipsed that mark.

Amelia Fjeldstad led the Mustangs with eight points, while De’Asia Wilson and Isabella Ballew each had six points.

All three of those players are also listed as members of Isabella’s varsity girls team and will see their share of time at that level this season.