Tigers fall in rematch with Helena 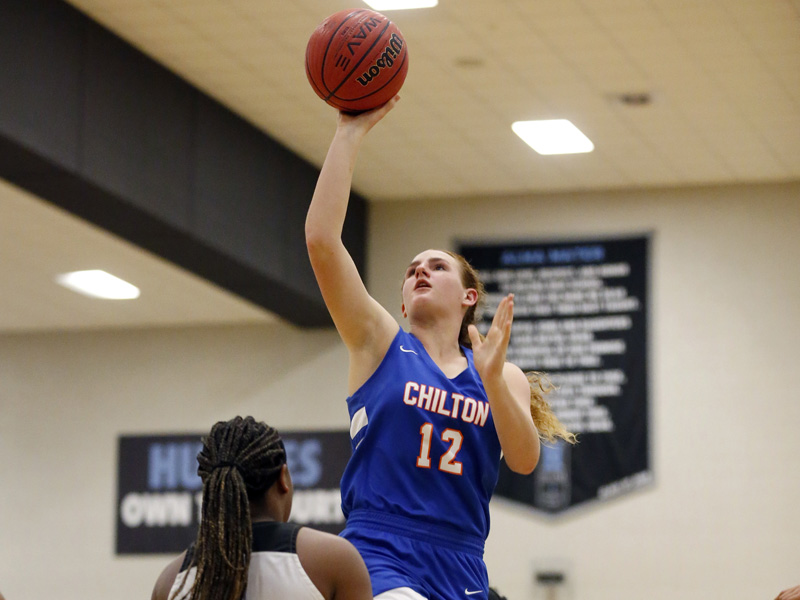 Marlie Giles of CCHS shoots over a Helena defender. (Photo by Brandon Sumrall)

The second game of a three-game road stint saw the Chilton County Tigers basketball teams taking on the Helena Huskies on Dec. 9 in a rematch of the season opener.

Unfortunately for Chilton County, the results would match those of the first meeting between the two schools as the Tigers’ varsity boys suffered a 43-36 loss, while the varsity girls were handed a 72-12 loss to the Huskies.

Helena would waste little time jumping out to an early lead in varsity girls action as a period opening free throw from Brooklyn Oden would kick start a 8-0 Huskies run that would eventually end on a pair of baskets by Marlie Giles for CCHS.

Brianna Gardner and Brianna Wilson would answer for Helena while a single basket from Giles would see the period end on an 8-2 Huskies run that would bring the period to an end with Helena leading 16-6.

Turnovers would be the key to the second period, as the Huskies defense would force multiple Tiger turnovers resulting in 10 fast break points for Helena.

K.K. Busby would come off the bench for the Huskies and post nine second period points that would be more than enough to outpace three points by Giles as the Huskies would go to the halftime break with a commanding 34-9 lead.

Both teams would choose to substitute deep into their respective benches during the final period as the Helena run would reach 38-0 before a buzzer-beating 3-pointer from Destiny Peterson would bring the run as well as the game to an end. 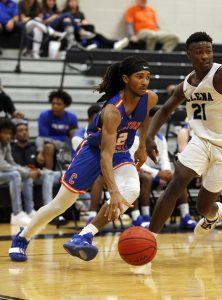 Chilton County’s Martez Stockdale drives to the basket against Helena on Dec. 9. (Photo by Brandon Sumrall)

Defense would be the order of the night in varsity boys action, as the two teams would amount a total of 17 first period points.

Sergio Romero-Rodriguez and Shi Keem Laister would combine to kickstart things for the Tigers, but a 6-all tie would come and go before a basket from Andrew Fortson would give Helena their first lead of the night while starting a 7-0 Husky run that would see Helena end the first period with an 11-6 lead.

B.J. Davis would put an end to the run to start the second period while starting a 6-2 Chilton County run that would pull the Tigers to within two.

However, Helena went to the half sporting a 23-15 lead over the Tigers.

Threes from Martez Stockdale and Jakaveon Bolding that would cut the Helena lead to five.

It was a brand new game heading into the final quarter, as the Huskies’ lead had been cut to two, 34-32.

Pierce would continue his hot hand from behind the arc to start the final period and would put Helena back out in front by five while Cave would later make it a seven-point Husky lead.

A basket from Bolding made it a five-point game with less than two minutes to play, but with the Tigers forced to foul and send the Huskies to the charity stripe, Helena knocked down just enough shots to escape with a 43-36 win over the Tigers.

Cave and Pierce each put up 13 points for the Huskies, while Acreman led the Tigers with 8.