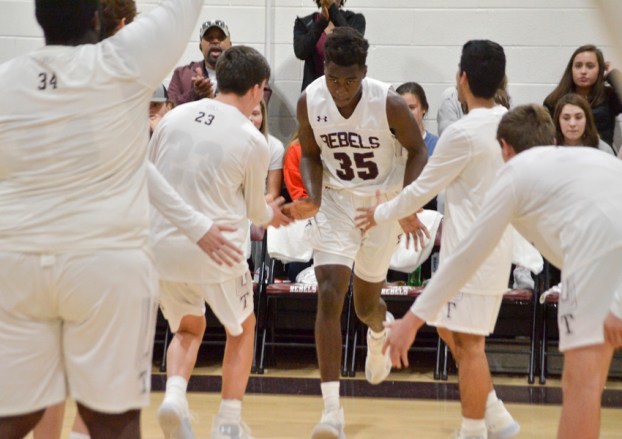 Thorsby’s Xzavier Leverette runs through a tunnel of teammates after being announced prior to tipoff. He scored a game-high 17 points on the night. (Photo by Anthony Richards)

Thorsby boys basketball earned its fifth varsity victory in a row following a 43-32 defeat of rival Jemison at home on Dec. 6.

The North Chilton Clash was alive and well as both schools brought their share of fans and packed Marvin’s Garden (Thorsby Gymnasium) on the Thorsby High School campus.

It was a productive scoring night for Thorsby’s big men with Xzavier Leverette and Tucker “Dale” Patterson accounting for more than half of the Rebels’ 43 points on the night.

According to Patterson, it was his best performance of the young season.

“I feel like I’m getting into that rhythm,” Patterson said. “Once they started getting in man [defense], we knew we had to speed the game up. We started making a couple shots and grabbing the momentum.” 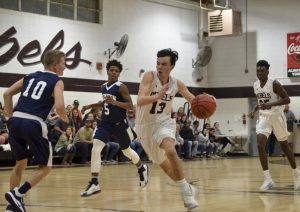 Tucker “Dale” Patterson drives to the basket in a fast break. He posted 12 points. (Photo by Anthony Richards)

The Rebels (5-1) jumped out to a 14-7 lead at the end of the first quarter, but the Panthers (2-4) flipped the script in the second quarter and the game was tied 22-all at halftime.

According to Thorsby senior guard Tyler Ray, an emphasis this year under new head coach Russell Ricks has been running more half court offensive sets.

“Overall, we’re coming together, and knowing when to backdoor [pass],” Ray said. “At times, its like we’re in each others minds, and we’re really starting to look like a team out there.”

However, the back-and-forth affair eventually swung fully in Thorsby’s favor after holding Jemison scoreless in the third quarter.

“We’ve been developing a lot and really practicing hard,” Patterson said. “We’ve been holding teams to less points and really starting to execute. It’s all about boxing out.”

According to Ray, the key to being able to extend the lead in the second half was the Rebels’ rebounding efforts and their ability to prevent JHS from getting second chance opportunities from missed shots on the offensive end.

“They have one of the best guys in the county, but we were to lock him down,” Ray said.

Nathan Johns of Jemison, who is a potential player of the year candidate, was limited to just two points in the contest.

Jemison’s leading scorer was Jonathan Lowery with 13 points, while Deven Moore tallied double digits with 10 points, including a pair from long range during the Panthers’ explosive second quarter.