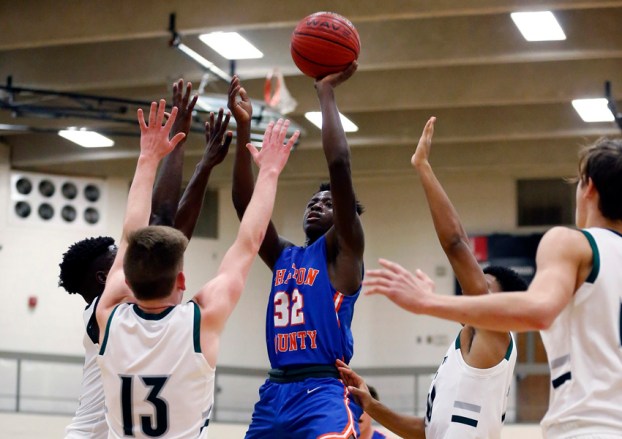 Chilton County’s Jakeveon Bolding drives to the basket among a host of Pelham defenders. (Photo by Brandon Sumrall/Special)

The ups and downs of the 2019-2020 basketball season continued on Dec. 6 for the Chilton County Tigers as the varsity boys and girls fell on the road to the Pelham Panthers 60-28 and 68-24 respectivly.

The evening’s first matchup between the Lady Panthers and Lady Tigers would become one sided early on as Pelham would show their might early and often by outscoring the Tigers 34-5 during the first period.

Sixteen first period points from Jeslyn Heflin would lead the Panthers to a commanding lead after one period of play.

Heflin would continue with the hot hand to start the second period thanks to a pair from the charity stripe that would start a 7-0 Pelham run.

The Panthers run would end on a 3-pointer from Chilton County’s Gabrielle Harris that would be followed by a pair of baskets from Marlie Giles.

Five consecutive points by Pelham’s Savannah Scarbrough would send the game to the halftime break with the Panthers holding a 50-11 lead.

The third period of the contest would start the same as the second, with Heflin putting more points on the board for the Panthers with back-to-back baskets to start the period.

Giles again would answer for Chilton County, but Pelham would take a commanding 62-18 lead to the final period.

With both squads electing to make deep substitutions during the final period of play while splitting 12 points in total between the two squads, the Panthers would cruise to a 68-24 victory over the Tigers.

Heflin led the Panthers with 27 points, four rebounds and five steals, while Giles led the Tigers with 11 points, five rebounds, and two steals. 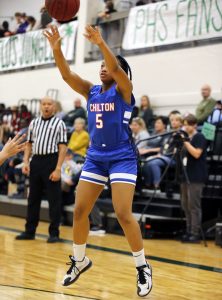 The first period of varsity boys action would be much more closely contested as both teams’ big guys would get things started as Kendan Maddox would get scoring started for Pelham while being answered right away by CCHS’ Shi Keem Laister.

Preston Smith would later put the Tigers out in front by two but it would be the nine first period points by Blake Floyd that would lead the Panthers to a 18-10 first period lead.

A three along with a free throw from Roy Gonzalez Flores to start the second would make it a 10-point Pelham lead, while Maddox would add another to make the lead 12.

Martez Stockdale would add a basket for the Tigers to cut the lead back to 10, while baskets from Floyd for Pelham and Sergio Rodriquez for Chilton County would later keep the lead at 10.

However, late baskets from Maddox and Flores would send the Panthers to the half with a 33-20 lead over the Tigers.

Floyd would continue his hot 3-point shooting to start the third with a basket from behind the arc that would kick start a 14-0 Panther run, in which Floyd would account for 11 of the 12 Pelham points during the run.

With just a pair of baskets for the Tigers on the period, the Panthers would take a commanding 52-24 lead to the final period.

Flores would again get the Panthers started in the fourth while being followed by a three from Myles Winn.

Stockdale would answer with a basket for the Tigers and would be followed by another from Rodriquez.

A three from Hawthorne along with one from the line from Austin Hill would bring the game to its final score as Pelham would cruise to a 60-28 victory over the Tigers.

Floyd led Pelham with 21 points, including 15 from behind the 3-point arc, two rebounds and three steals.

Verbena won a couple of wild basketball games against Jemison on Dec. 5, as the Red Devil girls and boys... read more