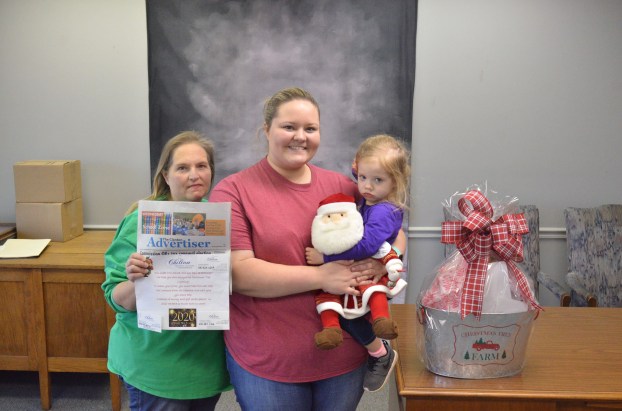 When the Chamber decided to hold the event again this year, the members looked for a way to add even more spotlight to local businesses.

Thus, the idea of a holding a scavenger hunt was born.

People had a number of hours to track down and solve 15 clues spread across businesses in downtown Clanton that led to a prize, a gift basket containing $300 worth of gift cards to local businesses as well as $200 in cash.

When all the fun had ended, it was Katie Dawson and Misti and Raleigh Watley that found a small stuffed Santa Claus that signaled the end of the event.

“We enjoyed it,” said Dawson. “It definitely needs to be a tradition.”

Dawson said the first few clues were “pretty easy,” but like several other participants her group found the one that led to Maddogs Grill a bit tougher than the rest.

“Then the very last one was the hardest. It got us,” Dawson said.

Santa Claus, as it turns out, was hidden inside of a newspaper box owned by The Clanton Advertiser, one of many businesses who partnered with the Chamber to help put on the event.

The first clue of the hunt ran in the Advertiser the day before the event in order to give anyone participating time to prepare for the next day.

When no one had located Santa Claus by 2 p.m., Chamber Director Francine Wasden decided to drop another hint on social media.

The word “change” was included, and many participants caught on that Santa Claus was inside a newspaper box.

Dawson and her group were the first to collect Santa, and they went to the Chamber for their prize.

“We’ve all had so much fun with this event!!,” the Chamber posted on social media. “Thank you to all the businesses who donated prizes and participated in this, we couldn’t do all of this without you!!”

By J.R. TIDWELL / Editor The Chilton County Chamber of Commerce has recognized boutique Willow 31 in Clanton as its... read more