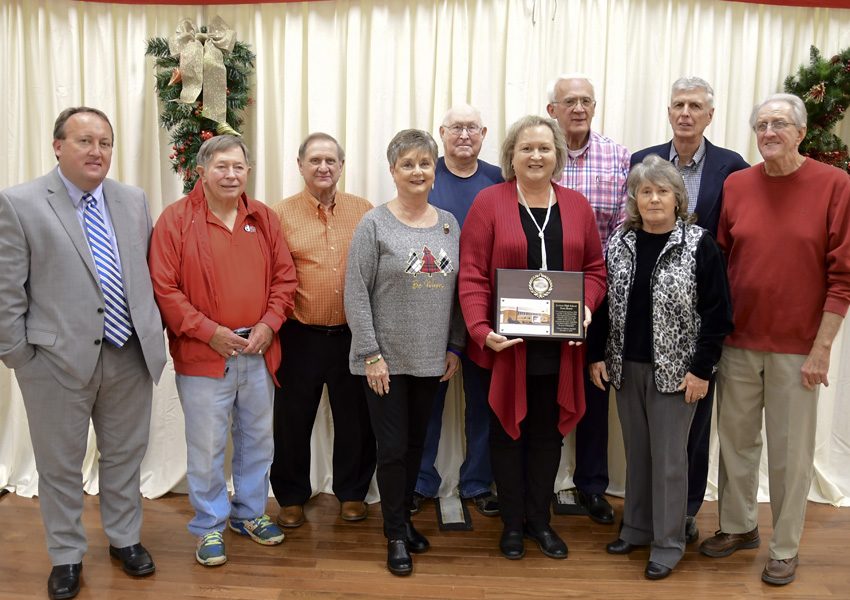 Former JHS basketball players and coaches were on hand for a presentation of a plaque that will be placed on the wall of Alton Cobb Gymnasium beneath an old scoreboard. (Photo by Anthony Richards)

“They have given their lives trying to mold the minds of the future,” Jemison Mayor Eddie Reed said.

The event was an opportunity to honor retired teachers who had taught at any of the Jemison schools.

“You’re job was so much more than teaching children,” Shannon Welch with the City of Jemison said. “Your influence is still being seen today. It is your day to be honored and it is much deserved.”

Former JHS basketball players and coaches were also on hand for a presentation of a plaque that will be placed on the wall of Alton Cobb Gymnasium beneath an old scoreboard that was re-discovered about a year and a half ago.

Although the scoreboard does not work, it is a piece of JHS history having been used in the school’s former gym. 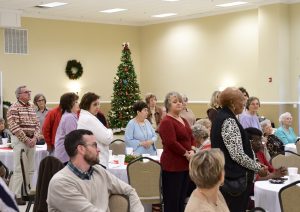 All the retired teachers in attendance were asked to stand up and be recognized. (Photo by Anthony Richards)

Randall “Corky” Chandler, Billy Jones, Marshall Killingsworth, Jerry Stephens and Harry Hale each played for the Panthers during the 1960s while the old scoreboard was still in use.

Prior to her career as a judge, Hardesty taught at Jemison High School and helped create the first girls basketball team in Chilton County.

She wound up leading her 1984 squad to the state championship, where they lost to Winfield High School at Fair Park Arena in Birmingham.

“We had a great time, and it was an honor,” Hardesty said.

Hardesty mentioned how happy she is to see how much girls’ basketball and athletics have grown in the county over the years.

Old Town Eatery catered the meal for the event, and the JHS culinary students served the guests.

JIS seeks PLTW in all classes