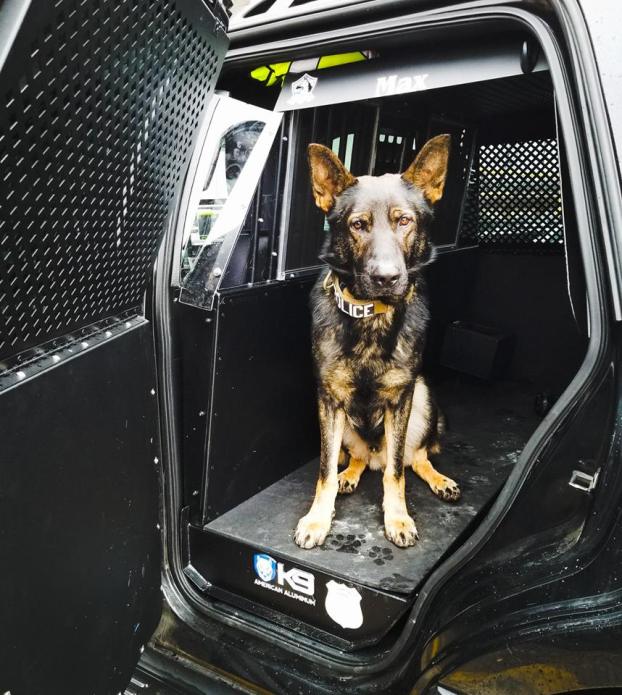 Clanton Police Department K9 Max is the grand marshal for this year’s Christmas parade. He is representing all of the first responders in Chilton County. (CLANTON POLICE DEPARTMENT)

Across the state of Alabama, eight members of law enforcement have been killed in the line of duty in 2019.

In light of the deaths of these individuals who gave their lives in the line of duty while helping to protect and serve others, as well as the sacrifices made by all members of emergency services each and every day, the Rotary Club of Chilton County has decided to honor all first responders during the annual Clanton Christmas parade on Dec. 6.

The representative for local first responders who will serve as the parade’s grand marshal this year seemed to enjoy the news of him being nominated for the role. In fact, his tail started wagging right away.

Clanton Police Department K9 Max will be the guest of honor at the beginning of this year’s parade. He will be accompanied by Capt. David Clackley of CPD, his owner and handler.

“I appreciate them recognizing members of law enforcement and first responders,” Clackley said of Max’s nomination. “I wouldn’t want my family living in an area where the members of law enforcement and first responders didn’t care about the place. We do care, a lot. There is a lot of sacrifice we make every day, including time taken away from our families. The job has its good moments, but the bad outweighs the good most weeks.”

Max is a tracking dog for CPD. He spends much of his time on duty searching locations like schools for drugs. He also helps track down those running from the law and missing persons when the need arises.

“He does the job just like I do,” Clackley said of Max. “He loves to see people and visit with them. This will be like one big visit to him.”

Those wishing to be involved in the parade float judging need to be lined up at 5 p.m. at Clanton City Park. The actual parade will begin at 6 p.m. leaving from the Park Plaza area.

Clackley and Max would like to give a shout out to a nonprofit called Protection4Paws that holds fundraisers in order to help supply K9s across the country.

Clackley said they have donated around $15,000 of equipment to aid three K9s in Chilton County alone.

They can be found online and on Facebook by searching Protection4Paws for anyone seeking more information.

Clackley said that the group sells plush versions of police K9s, including one that looks like Max, as part of its fundraising efforts.