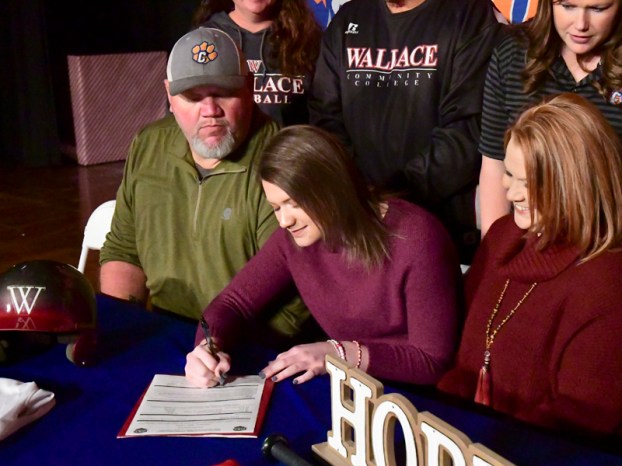 Hope Watts will soon be living her dream of playing college softball after officially signing with Wallace Community College-Dothan on Dec. 2.

Watts has played competitive softball since she was about 8 years old and has been on the Chilton County High School varsity softball team since seventh grade.

Hitting is the area of Watts’ game where she has seen the most improvement over the years.

“I feel like hitting is the hardest part of the game, so you’ve always got to be working at it,” Watts said. “On nights when I get bored, my dad and I will go hit. That’s just what we do.”

That sentiment was shared by WCCD head coach David Russo.

“We loved her swing, because she stays in the zone really long, and that’s going to showcase into a high batting average at the college level,” Russo said. “I think she’s only going to continue to get stronger.” 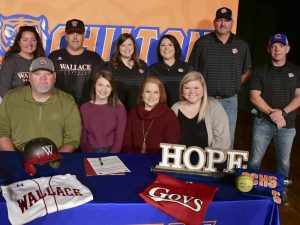 Watts was surrounded by family and coaches during her signing ceremony. (Photo by Anthony Richards)

Russo expects Watts to come in and challenge for playing time from the minute she steps on campus.

“Everybody we’re bringing into our 2020 class we expect to compete,” Russo said.

Last season, WCCD finished atop the Alabama Community College Conference and No. 4 in the nation.

According to Watts, that storyline of success played a definite role in her decision-making process.

“I’ve always thought about this growing up, and now it is finally happening,” Watts said. “I’m just looking forward to experiencing it, because there’s not many people that can say they played college softball.”

Watts will look to find a home at third base, which is a position she has become very comfortable with at the high school level.

“We look for versatile players, and she fits the bill,” Russo said. “She’s a good ball player, but even a better person.”